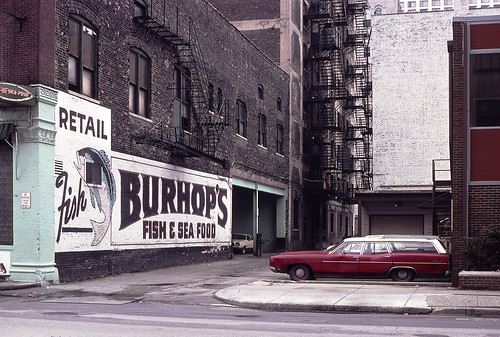 Friday before Memorial Day was special because it was the last three-day weekend of the school year, a last hurdle of fun that signified the final agonizing two weeks before summer vacation. The weather was postcard-perfect, with a yawning blue sky and only a few, small clouds left from the strong winds that tore through just days before. Dismissed from school at noon that day, and home twenty minutes later, the latch-key kid burst through the door of an empty house to wolf down a fast lunch. There was precious time to lose. Although dinner was many hours away, and the schedule was open, this was a rare, golden opportunity to relax, do nothing, and enjoy.

Boredom set in just as fast. In 1979, there was no Wii, no Xbox, no iPod. There were only nine channels of afternoon television, and two of them were in Spanish. The school year was still officially in progress, so the summer sandlot leagues had yet to be organized into teams of four, sometimes five, but never nine. For a sixth-grader in the Cragin neighborhood, one hope remained.

The bike was a near ideal machine in terms of its simplicity then. Hand brakes, dual suspensions, helmets, orange safety flags, chain covers, and padded handle crossbars were still generations of class action suits away. The bike then was like the cowboy’s horse: simple, loyal, and always ready for action. Riding was worry-free, and aimless—unthinkable today, unaccompanied minors would fearelssly ride the streets and alleys in no set pattern, never taking the same path twice, and therefore never seeing the same things twice. Kids would walk or ride the alleyways as eagerly as the sidewalks on the tree-lined streets.

So it was along one of those alleyways or tree-lined streets that easy rider crossed happy paths with another biker and grade school parolee, Mike. The two were in the same sixth-grade class, sometimes played on the same sandlot team, or at other times faced each other as fielder and batter. Today, however, they rode bikes together.

By another coincidence, both had a specific interest in Julie, a fifth grader at the same school. Even though she was far less interested in either of these two boys, the truth is that Julie tolerated Mike quite a bit more. He was, after all, dark-haired with black eyes and tan skin and a gentle smile, whereas the other boy once cracked her fairly hard with a ruler some years before.

After two hours of criss-crossing rides, the conversations on school, baseball, and bike-riding ran out. Julie was fortunately a topic with some substance, and they agreed to ride over to her house in the off chance she was home, or if not, riding nearby herself. The two rode at a casual rate, taking that right hand turn into the long alley that led up the big hill to Mulligan Avenue. Her house was at the top of that hill, right by the entrance to the alley.

About halfway up the alley along the hill, a garage door was open. This was by no means unusual: in the era before man caves and home theaters, thousands of Chicago retirees held court in their garages. The cars would be parked out in front of the homes, and the garages—which opened into the alleys—were a man’s private sanctuary. These garages were immaculately swept, with organized spartan work benches, wood panelling, refrigerators, and fluorescent lighting. There might be a stuffed lake trout mounted to a wooden plaque over the side door. The grand tradition held that the owner would open the big garage door to release the summer heat, plunk down a nylon mesh lawn chair, open two or three cans of beer, turn on his portable radio, and listen to the Cubs game on WGN as he did the Tribune crossword. On a given block, as many as three garage doors could be open at the same time.

Therefore, at about 3:30 in the afternoon, there was no surprise in seeing the older man in his garage chair, listening to the radio. The Cubs were playing in Philadelphia, so there was no baseball worth listening to in Northwest Chicago at that time. Yet his radio was on, tuned to WGN anyway.

The boys climbed their two-wheeled steeds up the hill, past his open garage. “You boys hear about the airplane?” They shook their heads no, and braked when the old man stood up and actually stepped out into the alley. The boys stood, straddling their tilted bikes, one foot on the pedals and one foot on the concrete ground. “Yeah, huge crash at O’Hare. I figured you boys were riding up here to see it.”

“No, what happened?” asked Mike.

“A plane, one of the big ones, crashed on takeoff. Look, you can see it; you can see the cloud from the crash,” he said, pointing to the northwest over the roofline of the houses on Mulligan. There, suddenly and surprisingly obvious, was a silvery-black mushroom cloud. It had to have been over a thousand feet tall. “They’ve been talking about it on the radio; I think it just happened.”

“Wow,” the boys agreed. The radio commercial ended, and the newsroom went right back to the scene. An American Airlines DC-10, fully loaded. Hundreds of people, possibly the worst crash ever of a single plane. A massive fireball leaving a smoky exclamation point visible all the way to the Loop. That the massive cloud and the horrifying deaths of hundreds were the same event was an equation not lost on two eleven-year-olds.

“Those poor people, and their familes, eh?” the old man wondered. The three listened to the radio, a scant twelve miles from the impact. When the older guy finished his beer, he dropped the can into the trash and went to get another; that’s when his wife came out of the house and walked through the yard over to the garage to see if he had heard what was all over the television inside. Since the news was now repeating the little they knew, and the black cloud hovered motionless at the edge of the sky, the boys continued further on. Mike called back a thanks, but was probably not heard. They rode the last two hundred feet to Julie’s, and circled around a few times in the street. The house was dark and silent. Still that cloud loomed overhead.

“She’s not home, it looks like.” Mike agreed with this, and suggested he was probably going to head back home. The afternoon had taken on a different personality, but he claimed it was getting late and he lived much further North. “Yeah, see you…on Tuesday, Mike.” Mike took off, North along Mulligan Avenue.

The other ride home alone would be quick; heading down the alley and picking up speed, one could swoop down across Mobile, dogleg over to Merrimac, and be home in less than three minutes. There were now two more retirees in that garage, gathering around the radio. Coasting past on a downhill bike, it was impossible to hear any update. The cloud was now evident even from the driveway of home. As the news unfolded—and there was no escaping it on any of the handful of channels—we learned more about that black cloud. That it was more than smoke. It was 271 passengers. It was 13 crew members. It was even two people on the ground. That it was a port engine, which inexplicably tore away on takeoff, rolling the plane and making it nosedive into an airplane hangar and trailer park.

“You boys hear about the airplane?” We eventually heard everything. That the airline elected to speed up an engine swap out, using a forklift to hold the new engine in place while they inserted bolts into the pylon. The forklift was not in a perfect position, and the weight of the engine hanging from the pylon fatally stressed the clevis that held the pylon and engine to the wing. As Captain Lux throttled the engines to rotate the plane upward that afternoon, the engine tore off while the plane hurtled off the runway, slicing the needed hydraulic controls as well as the warning mechanisms that might have told them how to respond. We learned that the flight crew could not have even known what happened from their vantage point. Ironically, we learned that the passengers may have known more than the pilots: that they were in their seats, seeing the engine tear away, and also likely watching the cockpit camera on takeoff: on the cabin monitors, they could see the stunned and frustrated pilots vainly fight for control that could never return, until the ground jumped up to the windshield. And still later we learned that the chief mechanic supervising the engine swap killed himself in grief, and that most of his team led sad lives, ruined by drug and alcohol abuse. That American workers helping to move and transfer bodies and wreckage into a hangar continued to smell charred flesh and kerosene when they entered that hangar even 20 years later.

“You can see the cloud from the crash.” Some of us still can.