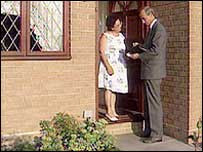 After arriving home last night from a grueling work day with the prospects of more work to be done from home in the evening, I noticed that a number of “uniformed” petitioners were wandering our neighborhood.  Two walked past the GorT residence eyeing it, but not daring to make the trek up the front walk.  Given what transpires, I’d characterize that as an “intelligent” move on their part.  About a half hour later, one bold individual approaches and rings our doorbell.  I answer the door and they introduce themselves as representing Environment America, a federation of state-based, environmental “advocacy groups” (this is the new PC term for lobbyist because we know that President Obama doesn’t mingle with lobbyists).

I let the young lady start her prepared speech and after promoting the benefits of solar and wind energy, she made the mistake of asking me, “Don’t you think we should push for this?”  I answered her question with a question about whether they advocate nuclear energy.  “Oh, no, that’s dangerous.  We see more benefits in wind and solar energy.”  She still had the doe-eyed look of a neophyte that clearly wasn’t fully informed.  I began the education process.  “Did you know that France generates over 70% of its electrical energy from nuclear power? and a number of other European and Belgium over 50%? Neither with any disasters?  Did you know that many colleges and universities have small reactors on campus that are extremely safe?”  At this point she started shuffling her feet and trying to think of what the next talking point was.  She couldn’t offer a response, so I continued.  “Did you know that we have technology today to put safe nuclear reactors in local regions that would cost the consumer less money per kilowatt than solar, wind, wave or other ‘greener’ sources?”  She chose a proper course of action at this point by thanking me for my time and leaving.  I didn’t even have the chance to point out that California, with its higher emission standards – along the lines of what POTUS Obama pitched yesterday – imports MORE energy than any other state.  When regulation was attempted by rationing gas supplies back under President Carter people ended up driving MORE.
So here are a few observations.  First, make no mistake, there is a “Big Environment” movement.  It has deep pockets (and looking for more given the door to door sales job described above) and plenty of lobbyists working Congress.  Environment America, in their brochure, paints themselves as a small group and effort behind the large (and evil) “Big Oil, Dirty Coal”.  groups like them and US PIRG are part of this Big Environment movement.  Second, a note to people working in that lobbying sector – don’t send amateurs to my house.  Period.  If you purport in your pamphlet to want to “[bring] the debate to front porches, kitchens, living rooms and town halls” then come informed.  You are no better than the single-interest lobbyists for Big Oil that you are fighting against.  In fact, Big Oil has one thing going for them that you don’t: their solution is more cost effective for the consumer and guess what?  Consumers are feeling the pinch.  This is the crux of the issue – they can’t win when it’s purely a consumer and market-driven decision so they must have government mandates (i.e. CAFE standards, 39 MPG National standards, etc.) in order to advance their cause.  Finally, it’s really hard to have this debate on my front porch in mid-May in a Washington, D.C. suburb bemoaning that we have to do this to stop global warming when we had a FROST ADVISORY the night before.  Even the EPA thinks this will damage the economy.
Seriously, read this blog, ask questions and get informed.  Don’t buy everything that these “advocacy groups” are selling or that even mainstream news is reporting.  Real science, based on fact, is showing major problems with global climate models.  We’ve cited them here before and we’ve outlined successful endeavors for nuclear power.