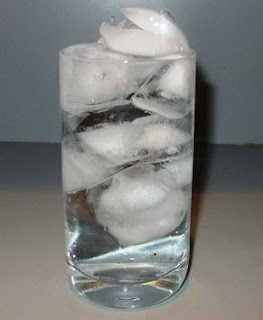 Steven Chu, Obama’s Energy Secretary made a dire forecast at the Summit of the Americas in Trinidad and Tobago: human contributed greenhouse gases will induce climate changes causing global warming and the Arctic Ocean ice will melt causing sea levels to rise and flood island nations.

Wow. Really? That’s some nice fear mongering (remember the stuff Obama said that he would change when he brought hope & change to Washington).
Well, if Mr. Chu is reading this maybe I can point him at the Archimedes principle. It’s something I saw demonstrated in nursery school. The Arctic Ocean ice (consensuly agreed to likely be the first ice that would melt with warming temperatures) is a floating ice shelf. The water level has already been displaced by that amount of ice/water already. We’ve probably discussed this before and maybe even illustrated it but Mr. Chu should take a cup of water put some ice in it and mark the level. Then, maybe a a break, read some more Gormogon posts, and when the ice has melted check the level. I’ll leave it as an exercise for the readers at home to do for the answer.
Let me be clear – I’m not saying we shouldn’t be good stewards of the Earth, but foisting junk science and FUD (Fear, Uncertainty and Doubt) upon us, especially after claiming to be bringing hope & change instead of fear, is disingenuous. Read this for more information.