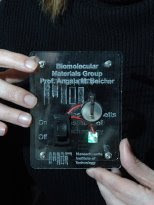 Maybe another reason why the contender from the GorT region should have won.

This could really revolutionize all electronics and cars with the possibility of a 2nd industrial revolution.