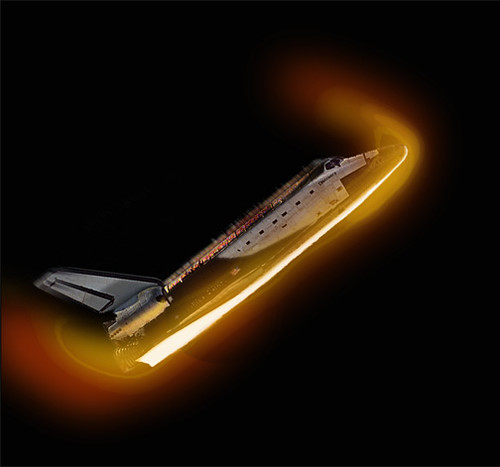 Imagine this as a movie plot.

A secret military operation sends the space shuttle up, only years after a horrific disaster. The mission is so hush-hush that communications are restricted.

During the mission, the crew notices severe damage to several of the shuttle’s heat tiles…the failure of any one could likely result in total catastrophe and burn up of the shuttle and her crew.

The crew realizes the implication, and each member silently begins to assess the very real probability that he will be vaporized in a matter of days. No rescue mission is possible. There is no lifeboat.

The crew takes detailed video of the damage, but due to the military comms blackout, only a low-res version is sent due to restricted bandwidth on a secure channel. The ground crew reviews the grainy, black-and-white footage and relaxes: the damage is nothing more than shadows and tricks of the light. They order the shuttle to return as scheduled.

The pilot cannot believe his ears. This is suicide, but he follows orders. He even orders the crew to look out the windows to enjoy the wonder of nature for what will likely be the very last time. They start their descent, and the captain watches the controls carefully for the earliest sign that they are seconds from being engulfed in flame, so that at the very least he can notify ground contol of the situation and to say goodbye.

White-knuckled, he tries every trick he can to reduce exposure of the damaged sections to the heat of re-entry, and a combination of luck and skill, he slows the shuttle down to a safe speed and lands perfectly.

Upon landing, ground control is horrified to see the damage was worse than they, or even the crew, understood. These were no tricks of the light or grainy shadows: the crew pulls off a Hollywood miracle by landing at all. Over 700 tiles are found to be damaged. Mathematically, they probably should not have survived.

Scary, huh? Except, it really happened in 1988. And incredibly, no changes were made to prevent this until we lost the Columbia in 2003.