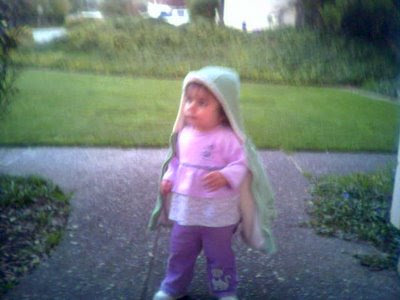 I’m going to tie together a few seemingly unrelated threads today. First, we have this study that finds that toddlers “neither plan for the future nor live completely in the present. Instead, they call up the past as they need it.” It’s interesting after having witnessed several events like this with my own children. Of course, it’s generally a little stricter in the GorT household where failure to obey is met with the lasers from the eyes, wiping out of the Capitol, etc.

Second, we have this report from Reuters explaining how less dustier air may be a significant factor behind warming the Atlantic and driving stronger hurricane seasons.  The study suggests that up to 70% of the warming of the Atlantic could be driven by particulates in the air, largely blown from North Africa.
Last, we have this paper published by Q.B. Lu from the Department of Physics and Astronomy, University of Waterloo, Canada in which he shows that there is a 11-year cycle of cosmic rays that bombard the Earth.  Now, with reliable satellite data from 1980 onwards, he shows a direct correlation between the cosimc rays and the ozone layer “health.”  Remember the late 1980s when we had to ban Clorofluorocarbons (CFCs)?  Hair spray, aerosols, etc??  Why?  Because, Big Environment back then believed that it was creating a hole in our Ozone layer over Antarctica.  There were models developed for the grave crises culminating in a total loss of the ozone layer.  43 Countries signed onto the “Montreal Protocol” (hint, hint, remind you of another “city” protocol as of late?)  As recent as 2 years ago, we had statements like,

Well, according to Mr. Lu’s study, we’ll see another growth in the Ozone “hole” in 2019-2020 and this won’t “disappear” unless we do something about the cosimc rays (Shields up!).

I have two beliefs in why we have hysterical reactions (i.e. the impending Global Ice Age that was predicted in the mid-1970’s, the Ozone depletion in the 1980’s and Global Warming of the late 90’s and early 2000’s.   First, there is the drive to be the first.  The first to publish, the first to discover, the first to do something about some perceived crisis in order to get credit.  I’ll fault the scientists if the intention was there to short their research, but I generally think that they are putting out reports as studies continue.  The fault with them lie in not caveating the fact that there is so much complexity in the global ecosystem that we know so little.  Deriving a conclusion is problematic at best.  However, the politicians and media reporters are largely at the center here as it drives their “success.”  Second, I think there are people out there who are, for illustrative purposes here, grown up toddlers.  They can be told that facts exist (“it’s cold outside”) and that certain actions are inappropriate or appropriate (“put a jacket on”) and they just file it away for recall as they need it later.  Do you see where I’m going?  Many of us have heard or even entertained debates with liberals and it appears that they shun facts and logical conclusions and until it really smacks them in the face, they refuse to believe it.  Where are they now with the “new ice age” that should be upon us?  What happens when we reach 2019 and the progress toawrds the $235B effort for banning CFCs where we’re supposedly seeing progress is reversed?  Will we then acknowledge that larger forces could be at play here?  We’re seeing the same act-first, think-later approach with CFLs and we are allowing this behavior to permeate into society.  This needs to stop.  We need to allow science and studies to continue following the Scientific Method and work from there.