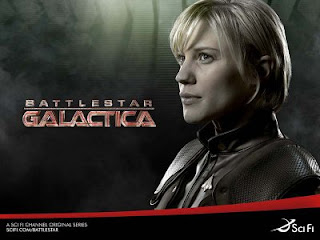 I’m generally dismissive of Hollywood for various reasons.  One is that they seem to kill or bury good, original shows.  Some may be construed as “cheesy” but there are a few good ones out there among the putrid reality shows.  Cases in point: Burn Notice with its dry wit, quirky characters and some decent plotlines; Leverage, while not unique as there have been other bad-guy-turned-good in a psuedo-Robin Hood manner shows, this one has a good breadth of characters and some really good suspenseful story twists at the end of shows; The Unit might be relegated to death, impacted heavily by the writer’s strike but I felt it did a good job of bridging military action to the small screen.  There are others, but those are a smattering of examples.  Having said that, I want to finish with one that I’m addicted to each week: Battlestar Galactica.  Sure, it’s a niche show in that it is a science fiction show.  Sure it has basis in a cheesy 1970s & 80s series.  But that’s where it departs – the acting is good as evidenced by the guest spots in various other shows by BSG actors.  The visuals are appealing and lend to the story – dirty floors, falling apart ships, etc.  It even mildly tips its hat to the Harlan Ellison screed against SciFi shows with explosions in space and ship manuevering.  The plot line can meander for a while and sometimes seems lost, but these last few episodes of the series (three left as of this writing), have shown the cast & crew to be on top of their game.  If you have the chance and even a mild interest, I’d recommend logging some time with Battlestar Galactica….the final twists and turns have me riveted to my DVR.  And while I find some of Dirk Benedict’s rants good and on target…I think I’ll have to disagree with his anti-new-BSG rant.