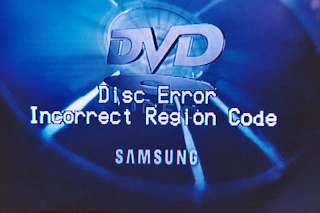 It pays to read all of the posts here.  Why, you may ask?  Because we’re right.

Case in point: The Obama Administration with help from their friends in Hollywood, decided that a gift appropriate for his first meeting with the British Prime Minister would be a set of 25 DVDs.  Sure, the gift was lame and Mark Steyn points out that the British PM has vision problems which make the gift even less appropriate.  But, wait there’s more.  The Gormogon power was brought to bear and the truth comes out:  The 25 DVDs are region 1 encoded, so what did Mr. Brown see upon playing one?  Yep, the one shown here.  How amateurish can this administration get?  Did no one think about this?  It’s the FIRST THING you do on your DVD player.   And you would think that this would be easy fodder for Colbert, Stewart, etc.  GorT is available to help with your NCAA Brackets…but of course, apparently the President is too.  However, one of us has a proven track record on prognostication lately.