In a close game, the Pontiff conceded to Technology Savings Us All as he had better things to do guiding his flock to the ever-after. In the other bracket, Bond clearly has a super car, so “there’s no such thing of Supercar” was outclassed from the start. Click to see the expansion. 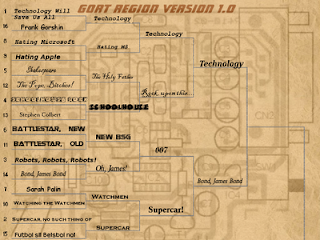