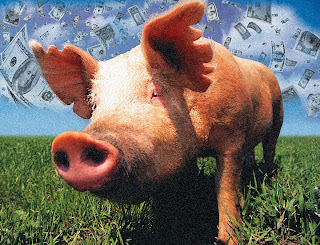 Sen (Dr.) Coburn (R-OK) is fighting the good fight. I caught up on my newspaper reading this morning and caught his excellent OpEd in the Wall Street Journal. Let me highlight a few of the salient points: less than 10% of the current “stimulus” bill (also known as the “Giant Technicolor Bailout Package“) could be (note: could) considered stimulus – the rest is (are) “egregious acts of generational theft in our nation’s history, with taxpayer money going to special-interest earmarks, an ill-conceived bailout to states, and permanent spending increases that expand government’s reach in areas like health care and education.” He points out a number of the pork projects in the bill including a $2 Billion (is that MM, ‘Puter?) FutureGen Clean Coal plant in Illinois, $800+ Million for Amtrak (that’s America’s subsized railroad), $1 Billion more for the already $3B overrun 2010 Census, and it goes on. The bill contains little if anything towards addressing the root cause (or causes) of the current economic woes. Check out more on his website here.

Here is the wise Sensator’s list of proposed amendments to at least help right the ship on this bill:

1. Require that all money in the bill given to states be a loan that must be repaid.

4. Sense of the Senate that the Congress should support President Obama’s “Plan for Restoring Fiscal Discipline.” (Specifically relating to cutting costs and inefficiencies of government.)

6. No more than $1 billion may be spent on projects for federal agencies inside the beltway.

7. Require that any contract that is awarded must be competitively bid.

9. Prohibit any Corps construction funds appropriated in this Act from being used for initial construction projects until all unfinished Corps projects have been completed.

10. No funds from the Federal Building Fund may be used to construct new federal buildings until the government reduces its inventory of surplus/excess real property by 50 percent as of the date of bill passage.

11. None of the funds made available for the National Park Service may be expended unless such funding directly reduces the deferred maintenance backlog.

12. Strike authority for the Director of Indian Health Service to spend all health information technology funds ($85 million) at his discretion, regardless of current law (competitive awards, bidding, etc).

13. Cut $3.25 billion in funding for Workforce Investment Act programs since WIA has not been reauthorized and GAO has found duplicative job-training programs across 8 different federal agencies.

14. No funds in the Act may go to a public or private institution of high education that has an endowment of more than $15 billion and/or spends more than $100,000 on lobbying annually.

I can’t find much fault with any of these…and it’s good to note that #2 already was taken care of last night.