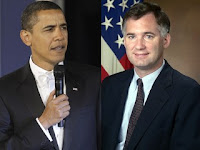 I’m sure the first few days of a Presidency is stressful. However, for all the “change” that people wanted are they really getting it? Case in point #1: The Executive Order closing Gitmo. A criticism (valid in many ways) of the way the Bush Administration executed the actions in Iraq was that they had no plan for after the fall of Saddam Hussein. So now, it appears that we’re closing Gitmo with no plan for what to do with the terrorrists there (one former detainee is apparently now the head of al-Qaeda in Yemen). Much like before, we’re going to get a “commission” to come up with a plan.

QUESTION: Robert, how can you say the executive order on Guantanamo Bay — you can say clearly made America safer today, when it doesn’t seem like you really have a plan yet about where the detainees are going to go?

That’s why I was careful in saying that the process by which this will undertake over the course of up to one year will determine, as Greg laid out, who’s involved in what status of detainee, which group that they’re involved in, and ultimately study how best to — to deal with them in a way that protects our country, protects our values, and administers justice.

QUESTION: So these are terror suspects, and the American people are hearing, “Washington’s going to study it.” They’re going to find out for a few more months, what are we going to do with these detainees? So what…

QUESTION: No, but he was talking about it on the campaign for months, on Guantanamo Bay.

QUESTION: But the bottom line is that you’ve been talking about it — the president talked about it on the campaign trail. People have studied this for a long time. And you’re now signing the executive order without a plan for where the detainees will be. What assurances can you give the…

GIBBS: No. No, we’ve signed an executive order to establish the plan for what happens.

QUESTION: But what assurance can you give the American people that these detainees just won’t wind up out on the streets, won’t go back to their home countries and launch new terror attacks?

GIBBS: I can assure them that that — all of — all of what you just enumerated will be undertaken and studied as part of a commission to look into these very complex, very detailed questions.

Honestly, I can’t see how anyone can objectively watch that press conference and think that this was anything but amateurish.

Case in point #2: Can Obama handle the “grilling”? It’s only going to get harder:

During his first visit down to the White House Press Room, President Obama was asked how he could reconcile a strict ban on lobbyists in his administration with a deputy defense secretary nominee who lobbied for Raytheon, Obama interrupted with a knowing smile on his face.

“Ahh, see,” he said, “I came down here to visit. See this is what happens. I can’t end up visiting with you guys and shaking hands if I’m going to get grilled every time I come down here.”

Pressed further by the Politico reporter about his Pentagon nominee, William J. Lynn III, Obama turned more serious, putting his hand on the reporter’s shoulder and staring him in the eye.

“Alright, come on” he said, with obvious irritation in his voice. “We will be having a press conference at which time you can feel free to [ask] questions. Right now, I just wanted to say hello and introduce myself to you guys – that’s all I was trying to do.”