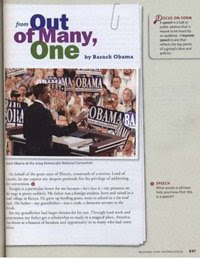 It appears that some American children’s curriculum includes a section on Barack Obama. Right in the Volgi’s backyard, 8th grade students in Racine, Wisconsin, have a literature textbook with 15 pages devoted to Barack Obama. No content of Reagan, Bush (either one), Clinton (either one), McCain, Kennedy (any of them), etc. Apparently the content focuses on Obama’s “Life of Service” (apparently, that’s code for voting “present” and/or skipping voting in the Senate half of the time). For those interested, the book is “Wisconsin – 8th grade – McDougal Littell Literature – copyright 2008″. Alfred McDougal’s support is pretty clear if you look here. So now we have taxpayer funds going to buy books promoting a single candidate. Is this education or propaganda? When does it stop? If you think I’m picking on a molehill, what would happen if the only politician mentioned in the book was George W. Bush or John McCain?