↓
Home→NASA→ABC was ahead of the time 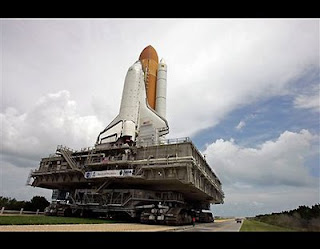 As the Atlantis shuttle rolls towards the launchpad for the STS-125 mission, NASA is dealing with a growing concern about space debris. Over the years, discarded boosters, satellites, etc. have accumulated in various orbits around the earth. Generally, the shuttle missions are at an orbit altitude where the chance of a serious collision with space debris is unlikely (NASA’s safety threshold is a 1-in-200 chance). For this mission to the Hubble Space Telescope, NASA is estimating a 1-in-185 chance prompting additional scrutiny. It won’t be long before something will have to be done about the debris (GorT’s personal opinion is that we should push it all towards the Sun and watch the nuclear furnace toast the debris….heck, if space launches get economical enough, we shoud do that with all our trash). We wish a safe voyage and good luck to the seven astronauts flying later this month! On a side note, it appears that NASA is extending the shuttle program lifetime to 2015, most likely to cover the gap as Lockheed and others ramp up the new Orion program (slated to return a human to the lunar surface by 2020). Clearly we need to pursue more into space for such a broad range of reasons. Maybe Andy Griffith can help with some of the concerns: