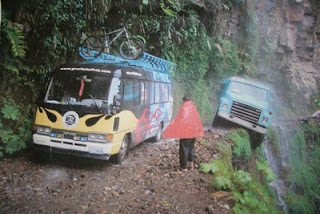 Fulfilling a promise made earlier, and sticking with GorT’s vacation travel theme, I propose that the single cruddiest stretch of “interstate” in the Northeast is I-476, the Northeast Extension of the Pennsylvania Turnpike.

The fine civil engineers who developed this thoroughfare clearly put in plenty of time figuring out how to produce the most white-knuckled, anger inducing driving experience ever. And you get to pay $5.75 for the privilege.
Starting in the strip-mined highlands of the greater Scranton/Wilkes-Barre Metropolitan Area and hurtling downhill to Filthydelphia, this road has earned my everlasting enmity. It’s four lanes (two each north and south bound) separated by a never-ending jersey barrier in lieu of a median or left shoulder (or breakdown lane for the Massholes among us (you know who you are)), leaving no margin for error. Toss in mountain terrain, 20 or so miles between exits, 2 rest areas for the entire 111 mile stretch, a mile long tunnel and approximately 5 gajillion Filthydelphians driving bumper-to-bumper at Mach 2. Don’t forget to toss the whiny kids in the back seat, and you’re in for a fun-filled day!
The only good part of this nasty road is that one gets to verify the truth of the old adage about Pennsyltucky: Pittsburgh in the West, Philly in the East and Alabama in the Middle.