↓
Home→Hockey→The Prognosticator Does it Again 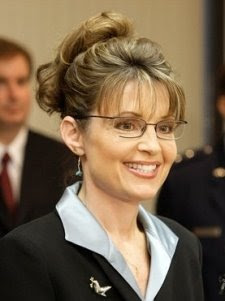 In two separate family discussions over the last week, GorT has put forward the idea of Sarah Palin (pictured) as the best choice for McCain’s VP. It appears this morning that it has been proven true. It is my opinion that this is a great pick. She’s young, a non-Washington DC insider, Pro-Life, a mother of 5 and a “hockey mom”. All three of us here are big hockey fans, so maybe the last point seals the deal. She’s cut thru a lot of the crap that politicians have been abusing lately (a big axe of mine to grind): she got rid of the private jet that former governor’s used to travel and has been taking commercial airlines and driving herself around. She’s significantly reduced (maybe eliminated) that the protection detail assigned to the governor. And if nothing else, she went into labor with her fifth child somewhere in the lower-48 and took a plane home to deliver the child in Alaska. She’s been through a lot and weathered it all. I think she is a very viable candidate.