↓
Home→China→How do you say “enemy of the people” in Chinese?

Confucius (that’s what 孔夫子 means) the Œcumenical Volgi assumes you’ve heard about Wu Tien-yüan and Wang Hsiu-ying, the two elderly women (79 & 77) from who were sentenced to a year of “reeducation through labor” because they asked for permission to protest the destruction of their homes. Well, just to make sure you know what kind of dangerous running-dog capitalist-roader rightist opportunists these women are, I think you need to see their picture (credit: AP). 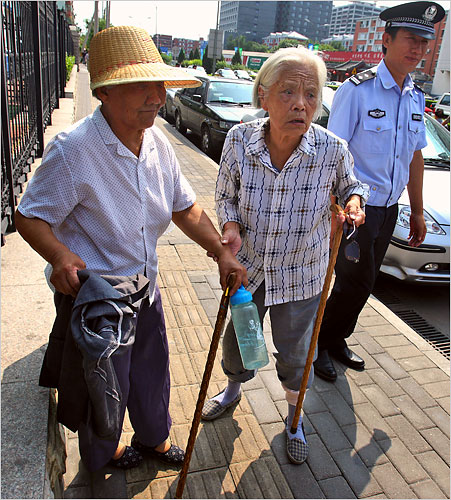 Yep. Look at them, those five-kinds-of-black elements. Seething with hatred, bursting with energy to destroy the gorgeous edifice of Mao Tse-Tung Thought, greasy with the oleagineous lucre of international finance capital! Yes! One year is not hard enough! Bring back the Red Guards! They’ll teach those rotten dog’s heads to apply for permission to protest! Cow devils and snake spirits inflaming and agitating! White Bone Demons launching unbridled attacks! EVERYBODY SING!

Wade-Giles is the official romanization of the Gormogons. Though we’re open to bribes to convert to Yale.