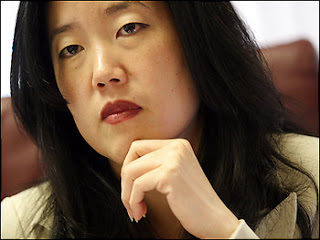 Steven Pearlstein of the Washington Post pens a story that ‘Puter wishes he could write about his local school district. And, best of all, Mr. Pearlstein gets it. Unions benefit the teachers, not the students, and in fact impede education.

Ms. Rhee has gone to the bargaining table with a proposal to end lifetime tenure and seniority based pay. Predictably, the union hates the idea, and has stalled negotiation. However, the tables are turning.

‘Puter is stunned, having witnessed firsthand the absolute dysfunction of the D.C. government under Mayor -for-Life Marion Barry, but the City Council and Mayor Adrian Fenty (D-DC) support her quest to fundamentally change teachers’ work terms.

National unions are watching this closely and fear that this may be their Waterloo. ‘Puter says it’s about danged time.

Godspeed, Ms. Rhee. ‘Puter wishes you the mad skillz of local D.C. hero Jhoon Rhee in your quest to beat down the unions. As yet unborn D.C. public school students wish you well in your quest to ensure that they will finally receive an education on par with those the best local suburban systems can offer.