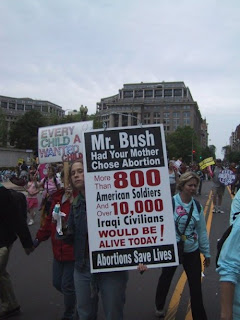 Today’s WaPo online has an article concerning the Bush Administration’s new regulations regarding federally funded health care providers. The regulations require that recipients of federal funds allow employees who are opposed to abortion to opt out of providing such services. Predictably, Planned Parenthood predicts that women will be left in the street to die once the regulations are in place.

This entire episode seems to be a tempest in a teapot. The feddle gubbamint is not required to affirmatively enable you to exercise your Constitutional rights, it simply can’t prevent you from doing so. If the gubbamint were so required, ‘Puter would be screaming that Congress did not appropriate sufficient funds to provide each American a firearm of his own. To defend the First Amendment, does Congress have to fund radio programs so extreme viewpoints can reach a listening audience, despite the fact that the programs would not otherwise be commercially viable? Oh, wait, nevermind.

Planned Parenthood’s argument seems to be that because there is a Constitutional right to have an abortion, the federal government must provide you with the means to exercise this right, even to the extent of requiring other people to assist you in getting an abortion, against their will. ‘Puter’s fairly certain that there’s an Amendment to the United States Constitution that prevents this, but that’s for another discussion.

‘Puter recalls back in the days just before he turned 18, then the legal drinking age in many states, the feddle gubbamint decided to tie federal highway funding to states’ adoption of a 21 year old drinking age. States howled, but the feds replied that the states could keep their drinking age, but they just wouldn’t get any highway funding. A relatively uncontroversial proposition.

These regulations are the same. Health care providers are free to continue to require all employees to participate in abortions, they just won’t get any federal money. A pro-abortion employer can simply refuse the federal money, and continue on its merry way, just as the states could have forgone the federal highway funds. The fact that most if not all will not forgo the federal funds does not change the Constitutionality of the government’s act.

If these regulations had involved anything other than the hot-button issue of abortion, they’d have been uncontroversial. And shame on the press for not pointing that out.