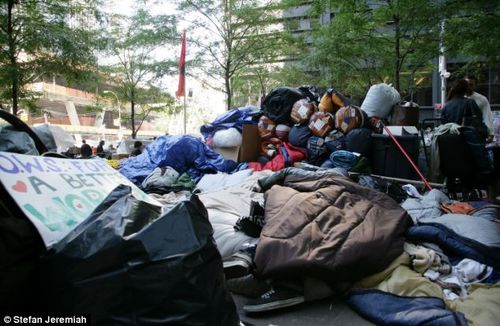 ‘Puter, in perusal of his usual virtual haunts, came across this wonderful Washington Post blog entry, as penned by James Downie. Mr. Downie, it seems, has a fundamental misunderstanding of our First Amendment, a misunderstanding that ‘Puter has seen repeated ad nauseam by liberal portions of the blogosphere in recent days.

Mr. Downie’s piece assumes that the First Amendment not only protects the Occupy Wall Street protestors’ right to speak, but it confers on them a concomitant right to prevent others’ access to public space, to endanger public health and to ignore applicable rules and regulations.

Here’s Mr. Downie, in his own words:

As hard as the NYPD and New York City’s government might try to obscure the truth though, one truth remains: At 1 a.m. this morning, in the heart of New York City, protesters exercising their constitutional rights to free speech and assembly were swept away by the state, while that state also did all it could to prevent media coverage.

‘Puter is intrigued by Mr. Downie’s understanding of the First Amendment. Put simply, Mr. Downie believes each American (or group of filthy Hippie-Americans) has an unfettered right to speak (‘Puter’s including the “symbolic speech” of squatting in said public space in quasi-permanent hovels) in a public space, even where such speech interferes significantly with the public’s use of such space.

Now, as many of you know, ‘Puter spent a few years among Constitutional scholars at one of our best (and hardest left) law schools, and ‘Puter can state that not even his militant lesbian, critical race theory loving Con Law professor would say that New York’s actions in evicting OWS so as to clean and reopen Zuccotti Park for public use is a clear-cut First Amendment violation.

1. What’s the regulation we’re talking about here? Judge Michael D. Stallman helpfully identifies the regulation at issue for us in his decision lifting a temporary restraining order forbidding NYC to dismantle the Zuccotti Park petri dish. (A different judge issued the initial TRO after NYC had evicted the OWS pigs.).

Judge Stallman indicated that when the park was dedicated to public use, though still owned by a private entity, the permit required that the park remain open to the public 365 days a year. Further, the judge indicated that at some point after the OWS parasites pitched their collective tents in Zuccotti Park, the private owner promulgated regulations regarding park use, forbidding camping specifically. Also, NYC has ordinances forbidding building without a permit, using flammable liquids in public spaces and crapping on the sidewalk.

So, the park must remain open to the public, camping is forbidden, as well as the accumulation of human waste. ‘Puter’s fairly certain the judge referred to the presence of feces and urine, not the the actual OWSers, but we can’t be sure.

Is it important for a government to preserve public health, as well as to maintain access of citizens to its public spaces? Yup. How’d you like to go back to the days of open sewers and the lovely scourges of cholera and dysentery that OWS seems intent on revisiting on New Yorkers? Or how about perpetuating the notion that anyone with a bullhorn, a bad idea and a bunch of brain damaged lemming followers can prevent you from using, let’s say, the National Mall, for months on end? It seems to ‘Puter’s simple intellect that preventing preventable outbreaks of 19th century (in this country) diseases, as well as keeping public public places are fundamental societal interests.

2. Is the government interest unrelated to suppression of a particular message? Again, this seems clear to ‘Puter.

In the Judge Stallman’s decision, linked above, he notes that once NYC cleaned out the OWSers literal and figurative shit, the protestors could return. Stated another way, the government only interfered with the OWS asshats’ First Amendment rights for long enough to restore sanitary conditions, at which point OWSers were permitted to pick up their misguided ass-hattery where they had left off. It wasn’t the speech that the City tried to prevent, it was the looming public health issue.

3. Is the regulation narrowly tailored to serve the government’s interest? Again, yes.

If the interest is maintaining public access to public space, then preventing campsites from taking up most of the available square footage is narrowly tailored. After all, the City’s not preventing the OWS adult children from returning, only preventing them from blocking other’s access. If you can think of a way to more narrowly tailor a statute or regulation to maintain unfettered public access to all park areas at all times while permitting unlimited campsites, feel free to email ‘Puter, for you’ve a better imagination than he.

If the interest is preventing horrible diseases from spreading rapidly in a densely populated urban environment, then preventing people from crapping on the ground or in unemptied buckets on site seems narrowly tailored. Additionally, based on the observed sanitary conditions on site, there can be no serious argument that the illegal Obamaville had become a public health threat. Dismantling that threat, and preventing its return, is narrowly tailored. How else can you rid NYC of the public health threat spawned by illegal squatters without proper facilities without, you know, removing the illegal squatters without public facilities? You can’t.

4. Does the regulation leave open alternate avenues for OWS butt-monkeys to express their infantile ideas?

Yes. We have seen it proven in application. Once NYC completed the cleanup, OWS cultists were permitted to return to their simple-minded exercise in futility, sans tents. It was not OWS’ puerile “message” that was squelched, but rather only their tendency to destroy everything they and their ideas contact.

That would seem to settle the matter for ‘Puter. OWS is still (and always was) free to exercise its First Amendment rights. OWS just can’t do so at the expense of others.

But what of Mr. Downie’s hyperventilation about the NYPD preventing press access to the eviction? As a matter of common sense, the police have the right and duty to prevent citizen access to areas for such duration as is necessary to prevent harm to the operation or to the individual seeking access. Heck, even the First Amendment Center (and as noted in the link, the Supreme Court) agrees with ‘Puter’s analysis. There is no right of the press to access to areas reasonably restricted to the public.

‘Puter believes it is reasonable for the NYPD, during an ongoing eviction process, involving occupants who had already indicated through actions flagrant disregard for both the law and public safety, to restrict public access. Permitting sympathetic press such as Mr. Downie access to the eviction would only inflame situation, raising the likelihood of violence. After reading Mr. Downie’s reactionary posting, do you seriously doubt that if present he would have interfered with the police? ‘Puter doesn’t doubt it. Not for a New York City minute.

In closing out this overly long post, ‘Puter wants you to consider Mr. Downie’s closing statement:

This morning’s action may not be what a police state looks like, but it’s certainly how one begins.

This, friends, is a prime example of leftie logic. Government using its police power to restore civil order is now equivalent to Stalin’s Russia, Hitler’s Germany and Mao’s China, all rolled up into one gulag-alicious package. Temporarily moving the OWS idiots to clean the man-children’s festering feces out of a public park is exactly the same as China’s disappearing Christians and human rights activists to lao gai, never to be seen again. If this is what you think, and your own words say it is, then get out of ‘Puter’s face. You are fundamentally unserious in thought, and reveal yourself to be nothing more than shill for the societally destructive behavior of the hard left.

Mr. Downie, you’re wrong. Wrong on the facts, wrong on the law and wrong on your spin. The OWSers’ long overdue eviction was not an oppression of First Amendment rights, but rather a reestablishment of the public’s rights: the rights to use the gosh-danged park free from interference, and the right to be free from the threat of the protestors’ disease-enabling open sewers. ‘Puter’s beaten this two-part drum (See? a gratuitous drum circle reference!) for eons now.

1. Just because you can do something (e.g., illegally squat in a park, live in your own feces, get a Fill In The Blank Studies doctorate, etc.) doesn’t mean it’s a good idea.

‘Puter spent the time to walk through Mr. Downie’s ill-considered screed because it’s important. It’s important for all to see the contortions the Left’s media enablers are willing to go through to advance the Left’s agenda. And if you think it’s going to get better any time soon, you’re crazy. This is just a foreshadowing of the forthcoming election year coverage.

P.S. Czar thinks you’re dreamy. Please send a used sock to him. I have included a self-addressed stamped envelope for your ease of compliance.