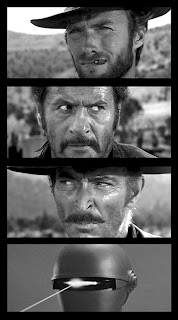 As I was completely entertained by the Volgi’s documentary of my recent trip back to the mid 1940s, I thought I’d provide a few other items on the iPad.

First, the good: this is an interesting take on the iPad In recent conversations around the campfire in the Castle (no seriously, ‘Puter loves to shoot some game, splay and impale it on a spit and barbecue it right in the middle of the all-purpose room), the Volgi and I agreed that the iPad is a strong candidate in the displacement of print media, particularly with its color capabilities and greater processing power than the Kindle and other e-Readers.  southern operative, JM, chimed in similarly with,

“Similar to the introductory versions of the iPhone and the iPod, the iPad is the 1.0 device and only 85% ready for Primetime. Furthermore, it’s a toy to act as the ‘Kindle-killer.’”

Agreed, and thanks for the mail – unfortunately, I don’t have an iPad to send as a thank you.  The people that love being on the leading and bleeding edge of technology with coin to spare will buy it.  The rest (including me) will likely wait for Generation 2 iPads.  But to the point of the linked story for this paragraph – while I wouldn’t call it a “Jumanji” platform, the article correctly points out that this could really open up “board games” for the future.  Imagine placing one on your coffee table and playing chess with someone online, real-time, with moving pieces.  Or a virtual poker table.  Or any number of play-in person games that have largely had problems translating into the play online, play by mail or play by email genres.  This alone might win me over, by the way.  Although I share the sentiments of the video below.

Second, the bad: there are alternatives lining up to chase Apple’s iPad.  They will likely lack the sleek and stylishness of the Apple devices but sometimes functionality overcomes form.  Given that this one debuts within six months of the iPad release and has additional capabilities such as a camera, interfaces and a more open operating system/platform, it probably warrants a pause before leaping head first into the iPad realm.

Third, the ugly: I spoke of this before and again recently, AT&T is having a terrible time with their networks.  Now they are admitting it publicly.  Again, I question why Apple went with the company when others have clearly invested more into their networks in recent months, including T-Mobile and Verizon.  I’m sure both of these companies have plans to 3G enable other tablet computers much like they’ve done with competing products to the iPhone.

So if Hasbro, Milton-Bradley or Steven Jackson Games needs a developer to help advance the market with the point in the first paragraph above, drop me a line.