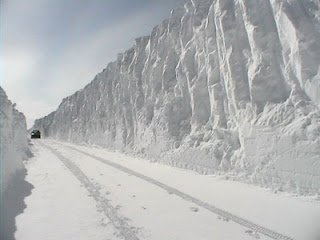 Well, ok, maybe not right now.  In fact, maybe not soon.  The disastrous and dysfunctional Copenhagen talks are taking place while Denmark is likely facing its first white Christmas in 14 years.  Aren’t you glad that President Obama sent Secretary Clinton over there on our dime to promise that the U.S. would commit large sums of money to this effort?  Maybe President Obama isn’t watching the weather channel.  Although it’ll be hard as here in the D.C. area are facing a forecast of up to 12 inches of snow in December – which if it does materialize to that extent, it will be the first largest amount of December snow since 1973 (11 inches) and closing in on 1966 (16.1 inches).  Of course, it’s nothing like upper Michigan where they are recovering from over 44 inches of snow  in a blizzard that included 90-120 MPH winds.  Of course, we have yet to see Obama or FEMA on the scene or even mention it.  This storm is on par with a Category 3 (almost 4) hurricane as far as winds and damage.  Minneapolis is digging out from a record 38.2 inches of snow from a storm that raced out of Canada.

Sure, this might be a single data point or anomaly, and proponents of anthropogenic global warming do the same thing.  In the end, we just don’t understand the complexity of the Earth’s climate and leaping head first into committing hundreds of millions of dollars and affecting a fragile economy isn’t sound policy.  Of course, if one believes strongly in human-caused global warming, then I would expect an outrage over the expenditures of the conference attendees with the limousines carrying small numbers or single dignitaries, the multiple jet trips to bring the U.S. attendees, Secretary Clinton and then President Obama to the conference.

I have to go as the Mandarin is asking me to melt the snow off one of his satellite dishes and Dat Ho won’t do it as he is afraid of heights.