We’ve been busy over the years.  Dat Ho was kind enough to pull out the Gormogon media guide as we sipped Brennan’s (except for ‘Puter who was swilling some Wild Turkey….it’ll make you hoot!) around the Christmas stump. 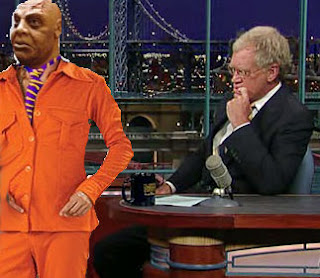 This is ‘Puter from a few years ago (yes, he does like the orange suit) on Dave Letterman’s show.  I’m not quite sure what Dave is looking at as ‘Puter greets the crowd…..although who knows what ‘Puter has stashed in the back pocket of that suit. 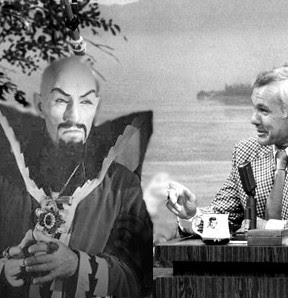 A few weeks ago, the Mandarin had me take him back to the late 50’s to make a guest appearance on Johnny Carson’s show.  After ranting in a few languages, the Mandarin proceeded to show his pet monkey who did tricks by hiding gold coins in Johnny’s ear.  Ed was not amused. 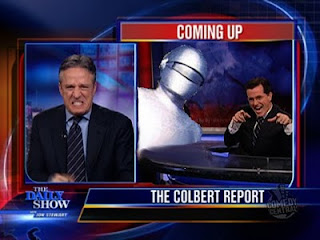 A few weeks ago I made a guest appearance on Stephen Colbert’s show.  Jon Stewart was none too pleased that he landed a Gormogon guest first.  Stephen is always good for a few good taunts.  After Al Gore cautioned Stephen about his fireplace and it’s contribution to global warming, Mr. Colbert turned it off.  I was a little cold in the studio, so I used my laser eye to fire up the fireplace before I realized that it was a faux fireplace.  My fault.