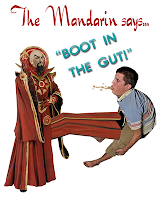 Here’s a quick recap of the six most recent bootings by the Mandarin.  We keep these on record just in case someone complains that they didn’t get booted (and then they get doubly booted – sometimes ‘Puter kneels behind them and the Mandarin boots them over ‘Puter into Sleekstak’s caldron brewing something).

6.  George Lucas – the Mandarin ran into him in passing at LAX and booted him screaming, “yeah, right, you had all nine episodes of Star Wars all thought out?  Midichlorians!  Whiskey Tango Foxtrot, Georgie-boy!”  BAM!  Booted.

5.  Veep Biden – he gets booted on a regular basis.  The thought here is that he can’t give away the secret location of the Castle nor of the upcoming Gormogonicon 2010.  Out of breath = can’t give away secrets.  Therefore, the booting continues.

4.  Kanye West – ok, look, the Mandarin is a closet fan of Taylor Swift.  Seriously.  He’s got the poster up in his room at the Castle.  He tries to hide it, but sometimes when traveling back from some other time, I miss the geostationary spatio-temporal landing pad and end up in his room.  Must be something else he’s working on causing the interference.

2.  Charlie Sheen – with all of his cheating, drugs, and other vices, this is almost like having morning coffee for the Mandarin.  Wake up.  Turn off alarm clock.  Boot Charlie Sheen for thinking about marrying Denise Richards.  Take shower.  Shave.  Boot Sheen again for The Chase….

1.  Any democrat member of Congress, and sometimes some of the republicans – after Cash for Clunkers, the Technicolor Stimulus Bill, and Healthcare, the Mandarin is so livid that booting becomes as instinctive as breathing.

So, you better be good for goodness’ sake or he’ll boot you in the gut.