The fifth and final set has arrived from the weirdos at LEGORMOGON, and it’s GorT’s Quantum Lair!

GorT lives up near the top of the Castle (just in case he blows the roof off, being up high limits the damage), where he performs his scientific tasks like time travel, microwaving toast, and hacking the NFL Network off satellite. 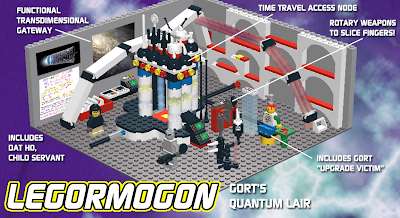 What is his lair exactly? Hard to say… it could be his bedroom, his family room, or even a kitchen. Who knows? Folks from the Year 5000 have a lot weird rooms standard in their house that we couldn’t begin to understand. For example, imagine trying to explain a “mud room” to someone from the 12th Century. Interestingly, GorT mentioned that even in the Year 5000, they still have Living Rooms even though they also have Family Rooms, although the 51st Century, the typical living room is a 200mm x 200mm x 200mm cube.

Be sure to check out the tools. No idea what some of them are, but quite a few are sharp and rotary. Don’t cut the webbing of your hand or slice off a finger tip like a total idiot! Be safe!

See our other sets at: