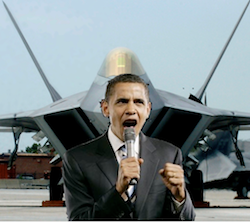 …Goldfarb drags me back in! Let’s just go to the money quote:

“White House aides actually made them remove the F-22-said they would not allow POTUS to be pictured with the F-22 in any way, shape, or form.”

While the ŒV grinds his teeth, go read all of Mike’s post and then come back.

Ok, we all up to speed? So whiskey the foxtrot is golf delta mike foxtrot is going on here?! What is it, now, the F-22 is the new handgun? It’s some sort of inherently demonic technology? Baffling.

The most likely scenario Confucius sees—unless it’s the genuinely crazy stuff Mike talks about—is that they were afraid of some hypothetical attack ad down the road along the lines of “Barack Obama…he’s happy to have photo-ops with the F-22…but would he spend the money to give our airmen the best fighter in the world? [picture goes photographically negative] NO. Barack Obama: Bad for our military, bad for our country. This ad paid for by citizens still pissed off about those idiots’ killing the F-22, M. Goldfarb, Œ. Volgi, chairmen.”

Anybody got a clue?