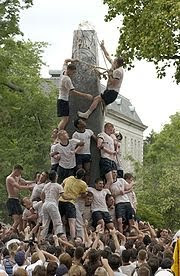 The Volgi pointed me at this article as he knows that I somewhat buy into broad generational patterns.  To set some parameters around this (and for more details, go check out “The Fourth Turning” by Pete Peterson), let me outline a few definitions that Peterson’s book uses.  We have a set of generations that we refer to as “The Silent Generation” (born 1925-1942), “The Boomers” (born 1943-1960), “Generation X” or the “13th Generation” (1961-1982) and “The Millenials” (born 1983-2004).  Peterson’s theory, which he maps well back to the War of the Roses, has each generation following one of four archetypes which are cyclical: Prophets, Nomads, Heroes and Artists.  There are also four phases of a cycle: High (everything is going well, an era of prosperity), Awakening (social, spiritual and guilt-driven challenges against the High), Unraveling (dissatisfaction with the spiritual or social changes, apathy and pessimism at a high), Crisis (generally a world event or status that culminates from the growing pessimism, etc.).  From Peterson, here are the relevant definitions: