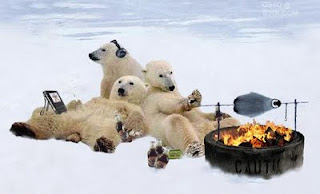 I’m going to cut through the chaff and get right to the core of the issue with the East Anglia / Hadley CRU emails: the corruption of the scientific process. I’m not sure where these “scientists”* were in grade school, but it was heavily reinforced in my education. However, I’m not a scientist by trade – these “scientists” are (or maybe were) and therefore the scientific process should be first and foremost in their minds on a day to day basis. Instead we have a pattern of behavior, one might say a conspiracy, to subvert the process through the squelching of a valuable peer review process, ousting of dissenters of one’s conclusions and a refusal to share methods and data in an open way to validate the hypothesis. However, maybe that last part is the real problem. Maybe the “scientists” in question don’t have a hypothesis that they are trying to prove, but rather a belief that they are defending.
What we have now is all damage control and spin. Why? Because the people who believe in anthropogenic global warming are so invested (movies, books, Nobel prizes) in the theory that they need to defned it or lose all credibility.
The first line of defense is that the emails were illegaly obtained through “hacking”. Irrelevant. While the act might be criminal (debatable if the “scientists” were intentionally hiding these emails from a FOIA request and depending on who hacked it), the fact remains that the emails and data exist.
The second line of defense is that the data and papers were peer reviewed revealing no flaws. That statement in itself is flawed. The peer review process doesn’t necessarily identify flaws – it winnows out the papers and experiments that are worth publishing versus those that are not.Science works by one person making a claim, and backing it up with the data and methods that they used to make the claim. Other scientists then attack the claim by (among other things) trying to replicate the first scientist’s work. If they can’t replicate it, it doesn’t stand.
The third line of defense is one that defends individual excerpts from the emails like the “trick”ing of the data and the “hiding of the decline” with alternative explanations. One only needs to question the need for doing this and the defense unravels. The data we have on hand only covers a geologically short, maybe insignificant, period of time. So the “scientists” in question augmented the data with other data. One must question the accuracy and relevance of the augmented/added data as they were not obtained in the same manner as the rest of the data. We might be, and likely are, mixing apples and oranges here. Specifically, in this case, some of the supplemental data sets included a 12 tree set from North America and a single tree from Yamal, Siberia.
For your continued edification, I’ll refer to two sites. First, this post has an excellent desconstruction of the events beginning with the inception of the FOIA requests. And then if you still remain skeptical of the statement made, go search the emails yourself here.