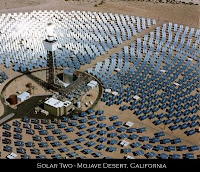 Since the world is ending before the 2016 Olympics, everyone is in a big rush to avoid fossil fuel energy sources and working towards these “renewable” energy sources.  We’ve discussed this before – the real bottom line in energy production is the economics.  Fossil fuels provide the best energy production per monetary unit (cents) at roughly $0.02 per kWh.  Replacement sources need to meet or beat that to gain widespread adoption — unless the government steps in and mandates change.

So, wind power (around $0.015 per kWh) is stalling because no one wants the big towers near them and there are limited land areas where it can be employed.  Now, solar power ($0.13 to $0.23 per kWh) is running into another roadblock: water.  Everyone probably thinks that solar is easy – prop up a bunch of collector panels or mirrors and abracadabra, instant power.  Well, not really.  There are two types of solar power collection stations: solar thermal plants that use “wet” cooling and a solar collection station with fans and heat exchangers that use “dry” cooling.  The former works much like a steam engine or turbine – water in pipes is heated to steam, a turbine is driven by the steam, condensed steam is reused.  In both types, water is needed to wash the solar panels periodically as well.  Estimates of water consumption for some solar plants in the west/southwest United States are closing in on over 1 billion gallons of water per year.  The real concern here is that these plants will deplete or severely reduce the available water in areas that are threatened by forest fires and already have a scarcity of water.

the key…is cheap electrical power from nuclear plantsWater in some way is a key component to almost all forms of power generation.  Largely it is used as a means of cooling, cleaning or energy transfer.  However, as pointed out in a recent email from avid follower, Eric C.: “the key to building a non-polluting hydrogen technology is cheap electrical power from nuclear plants.  Also solves the desalinization problem and allows the inexpensive reclamation of polluted water.”  He is spot on.  Nuclear power can unlock additional capabilities like the generation and fueling of hydrogen cells.