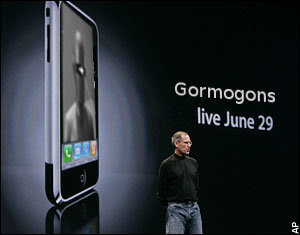 Microsoft, rightly so, has been much maligned for it’s overly chatty “security” features in Vista where almost any action (in the default setting) prompts the user to allow or deny the action.  Yes, you gearheads, I know this is somewhat configurable but even Apple jumped on the mocking with one of their “I’m a PC and I’m a Mac” ads (which completely amused GorT).

If Microsoft and Apple were in a political battle, the negative ad that Microsoft should fire back with would unfold like this.  PC guy and Mac guy start a dialog.  Light hearted quips are exchanged and then right in the middle of a Mac guy sentence, a big “Buy SnowLeopard Now!” sticker appears over his face as the remainder of his sentence is muffled by the sticker.  Fifteen seconds later, a “Click here to continue” button appears on the sticker.  PC guy reaches over and clicks the button which causes the sticker to disappear.  Mac guy looks confused, pauses, but continues with the previous banter about the ease of which some girl can save Christmas.  Another 15 seconds pass and a streetwalking billboard appears slung over the Mac guy’s shoulders.  On the front it reads: “FinalCut Pro: Become the Director you always wanted to be”.  Mac guy is confused again, spins halfway around and the audience sees the back billboard that shows the FC Pro box with a bright star with text reading, “In Apple Stores on….”  Mac guy tries to speak but now his voice is totally muted.  PC guy is distracted but upon refocusing on the Mac guy’s quandary, the ad disappears and we hear the Mac guy’s voice again.  Etc. etc.

Think this is far-fetched?  Well, Apple has filed for a U.S. patent on “showing advertisements within an operating system”.  Steve Jobs is listed as the first inventor.  Of course, the situation I outlined above is only the start.  Imagine seeing this on your iPhone…or iPod as both have “operating systems”.  In the middle of your run while listening to the Black Eye Peas, all goes quiet and then you get forced to listen to an advertisement.  We’ll have to wait and see if Apple is bold enough to go there.  This could be a savvy move to stake a claim to this kind of behavior in order to reap royalties but hide behind the outrage surely to follow by having the licensee company be the implementer that takes the heat.