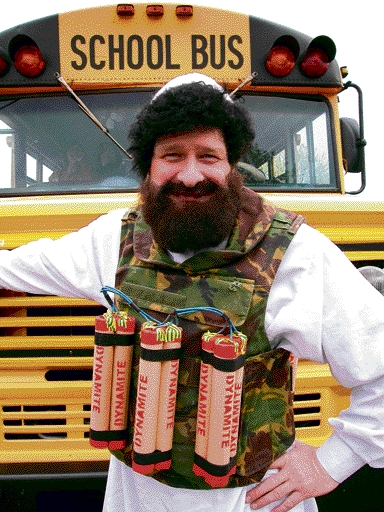 Reuters is reporting on the story “of an Illinois man who is being charged in a plot to bomb federal offices.”

Kudos to Reuters for not obscuring the fact that the alleged bomber Michael Finton also known as Talib Islam was a recent convert to Islam who looked to John Walker Lindh for inspiration for his attempted attack.

Of course, Mr. Fenton only converted to Islam after a stint in prison – although the article did not state what he did to be sent to prison. Your Mandarin finds it interesting that those that “find” Jesus while in prison don’t come out looking to blow up a car full of explosives outside of a federal building.

After his conversion and release from prison, Fenton/Islam went on a little pilgrimage to Saudi Arabia. It was during this trip that he was smitten with the idea of fighting for Palestinian freedom in the Gaza Strip against those evil Israelis. What an original idea. I’m sure he must have come up with this one on his own since we all know how much Muslim Saudi Arabia loves all people regardless of their religious beliefs, especially the Jews.

I’m sleeping so much better at night knowing that the President is going to close down that unjust concentration camp know as Guantanamo Bay and move all of its misunderstood and peace loving inmates to federal prison facilities here in the continental United States. As part of their rehabilitation maybe they can help the prison Imams with their “peaceful” teachings of Islam and the Koran.

I liked it better when all the prisoners would pick up in the “joint” was how to make radiator gin, carve a bar of soap to look like a gun, and make license plates.