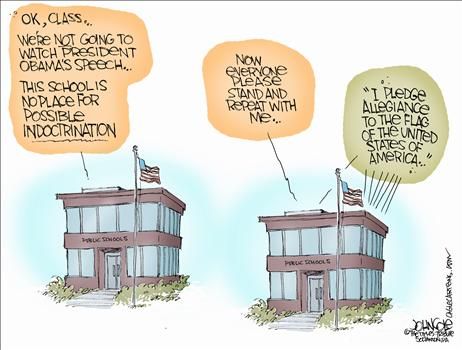 While reviewing the political cartoons at Townhall.com today, this one really caught my attention. I think the cartoon’s artist is illustrating what for me is the inability to distinguish between indoctrination to a distinct set of political views and the instilling of public duty, pride, and allegiance to the country.

Far too many of our politicians and members of the media have either forgotten, choose to ignore, or have never been taught the value of patriotism. Instead they profess party loyalty over loyalty to the country. That is why the Progressives scoff at anyone who declares their allegiance to country first and party second. For the Progressives, the party is the state, and the quaint and antiquated belief in country first stands in the way of their ideals and goal of a one world government and control over your life.

The pledge of allegiance is a call for the individual to realize that he is part of a greater construct and that from the strength of many we become one great nation. Those who feel that the individual is just a tool to reach the statist goals of the party look down on the individual and feel that all power comes from the state.

With Patriot Day soon approaching, I think it would be beneficial not only to yourself and your family, but also the country to think about the pledge and what it means to support the country and not your party.