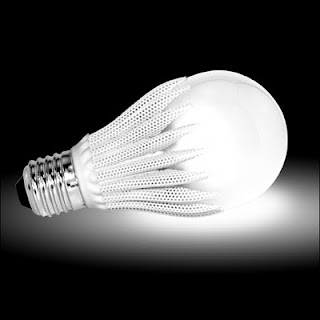 The EU’s ban on the sale of incandescent light bulbs went into effect this week. Retailers are allowed to sell off the remaining stock and then it’s the end. This isn’t the first ban (Australia already has one in place). We’ve covered this before so I won’t spend a lot of time on it but LED (Light Emitting Diode) technology has come a long way in the last few years and as I was walking down the local Costco aisles a month ago, I noticed that I could buy (in bulk) LED lightbulbs.

LED lightbulbs are about 2-5 times more efficient (as measured by electricity used for equivalent light wattage output) than CFLs and 10-15 times more efficient than regular incandescent bulbs. LED lightbulbs don’t have the problem of 3-5mg of mercury per bulb like the CFLs do and they don’t require an 11-step EPA approved hazardous materials cleanup procedure for a broken bulb. LED lightbulbs also don’t require specialized recycling or disposal facilities like CFLs. To their advantage, LED bulbs behave well with regular use (i.e. turning them on and off, use in closets, etc.) which bolster their advantage over CFLs. The sticking point for many of these energy efficient bulbs is the use of dimmers. Finally, incandescent bulbs actually are beneficial in colder climates – in addition to lighting all that “inefficient” heat they generate offsets the heat required to be generated by other means. It is quite possible that one would realize a savings on the electric bill by converting to CFLs, they are not without significant flaws.

So onward rushes more countries into banning the incandescent bulbs leaving the consumer with more expensive, problematic lighting options while touting an energy savings. One would hope the consumer will be able to realize this as the reduction in electricity demand will likely cause the cost to go up and negate a large amount of the savings.