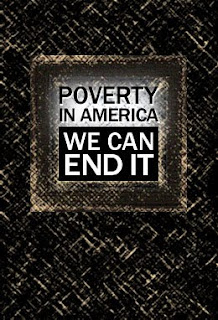 America and capitalism has done more to advance a citizens’ standard of living than any other “-ism” or means fo government. How much so? The poor in this country (roughly about 30 Million by the Census Bureau’s annual poverty report) are much more wealthy than their poor compatriots around the world. You might think that our poor are just on the higher end of the world poverty scale but I would argue that most of them don’t even belong in that category. Let me present a few facts gleamed from Robert Rector’s article on this subject:

Mr. Rector points out that in 2008, federal and state governments spent $718 billion on means-tested welfare aid, providing cash, food, housing, medical care, and targeted social services to poor and low-income Americans (this doesn’t count Social Security or Medicare). If we took that same amount and cut it by 25% and doled it out to those families under the federal poverty line, we’d have no “poor” left in the country.

So now we’re having another “war on poverty” in essence by trying to provide a means for somewhere under 10% of the country (the 45 million uninsured number includes those who voluntarily do not get insurance, so we’ll peg it closer to 30 million) to pay for medical coverage. This will be done via a progressive tax system to redistribute the wealth in this country.

Envy is probably the easiest deadly sin to fall into – coveting what others comes somewhat naturally in these times. So are liberals coveting the successes of some to the point that they feel these people should pay for other people’s health care, education, and other non-constitutional-based benefits? Don’t forget that a large amount of private charity funding goes to support these “poor” people as well. Of course, according to President Obama’s campaign speech to Congress last night, he wants another $900+ billion to make the nationalize health care system a reality (a number that many analysts say is off by a factor of 2 or 3). This would be over and above this $718 billion.

I think it’s all too easy to support Obama’s plan because it is a sin of envy. Instead we should be supporting acts of charity and mercy and encouraging those in “poverty” (maybe I should say relative poverty) to better themselves so that they can afford health care insurance like other employed people.