↓
Home→Barack Obama→Robert Gibbs: So What’s The Deal With This Guy? 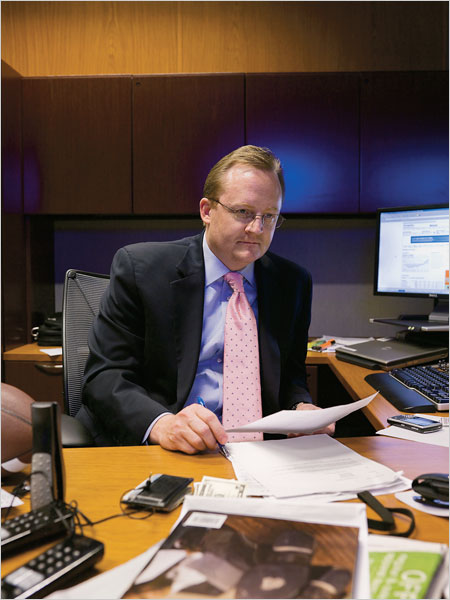 The Volgi wondered openly to the Czar whether Press Secretary Robert Gibbs is a sociopath or an intellectual feathweight, given how he seems able to reiterate the President as completely correct even when all the evidence produced in a question indicates the opposite is true. In concept, the Press Secretary should be able to deflect accusations of presidential dishonesty or self-contradiction by promising to get back to the questioner…once the stories are all straight. Gibbs, by his ability to repeat phrases like “The President is quite clear…” when the President is befuddling, must either be too goofy to know the truth or simply has no ability to conceive that repeating a mistake has consequences, even when it makes his boss look bad.

The Czar simply assumed Gibbs was a front lump knucklehead. But upon reflection and investigation—some of which took minutes—the Czar must conclude that Gibbs tends toward the sociopathic. He knows what he says is untrue, but is incapable of caring enough to filter what he says.

The story of Robert Gibbs goes back to John Kerry in 2003, where he served as Kerry’s spokesperson. He resigned when his mentor, Jim Jordan—Kerry’s campaign strategist—was fired over the Howard Dean ascendancy.

Gibbs and Jordan than took positions with an anti-Dean group, and created an ad against candidate Howard Dean that offended and shocked Democrats all over. Effectively, the ad said that Dean was unqualified to be President due to his lack of military and foreign policy experience. You know—just like Barack Obama.

The hostile ad was allegedly funded and suggested by Senator Robert Torricelli, whom you probably do not remember, although his career went down in flames after a couple of scandals in 2002 and later. The Czar cannot fathom what Torricelli’s motive was for such a negative ad against Dean, other than Torricelli was allied with Kerry. Torricelli used Jordan and Gibbs to create the ad, although Kerry had little use for either Jordan or Gibbs at that point.

Gibbs joined up with Barack Obama in 2004, where Gibbs became the then Senator’s communications director. Obama entrusted Gibbs with creation of the Obama image, with one strategy being the aloofness Obama displayed during the campaign. Although this often portrayed criticism that Obama was an empty suit, the fact was that the candidate lacked experience in many key areas, and Gibbs was clever enough to keep the candidate away from the media.

Gibbs uses the strategy of digging up dirt on others and keeping that information ready to block or distract from criticism. It’s a good move, time and again for him. Additionally, he is a master at producing quotes out of context: criticize the President, and Gibbs will counter by recalling the exact words you said yourself some years ago in another context that make you look hypocritical.

Gibbs does appear, from time to time, to launch attack missions of his own: he remains convinced that Rush Limbaugh is the voice of the Republican party, has criticized reporters here and abroad, and used statements from Dick Cheney against George W. Bush.

It would dangerous to dismiss him as a goof.

So if he is not a goof, he must be…what, a sociopath? Indeed, the Press and GOP have learned: if you want to have fun, get under his skin. He is easily angered, and often speaks the truth about his boss when pushed. He speaks without regard for consequence, and this can mean blatant lies or mistruths, disregard for whether you find his answer acceptable, and making mean-spiritied, personal attacks on others without any regard for the feelings of others.

Yeah, that could well be him.

So how long does Gibbs remain? He has been with the Democrats for most of his life, and seems to keep returning to the front each time. He’s been with Barack Obama possibly longer than any other staff member, and is a key influence on what the President does and says. He is, in effect, the teleprompter. But press secretaries tend to lose support when poll numbers go down: Bush blew through four of them. Clinton chewed up five. But GHW Bush and Jimmy Carter, who saw popularity plummet, had one each. The difference though is that the presidents who replaced their press secretaries tended to do so when popularity points dropped quickly. And no president has seen his popularity tank like President Obama. Gibbs might ask himself if he really is a Jody Powell (Carter’s press secretary, who hung on despite a slide in polls) or Dee Dee Myers, rapidly eliminated as one of many scapegoats for a Republican victory

James Hager, Eisenhower’s Press Secretary spoke on the nature of being Press Secretary: “One day I sat thinking, almost in despair; a hand fell on my shoulder and a voice said reassuringly: cheer up, things could get worse. So I cheered up and, sure enough, things got worse.”