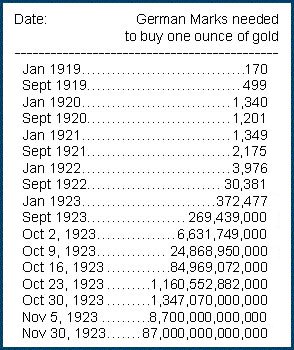 Those who inflict it are thieves, and they turn everyone else into paranoid victims. Glad Dr. D. mentioned this:

It is no coincidence that the Western leader most worried about a new bout of inflation is German chancellor Angela Merkel. If there is one thing that Germans agree about, it is the necessity—social and political as much as economic—of a sound currency. The hyperinflation of the 1920s brought about a German change in mentality as great as, or greater than, the one caused by World War I, with what disastrous consequences 50 million dead might attest if they had voice. The solidity of the deutsche mark was the great German achievement of the second half of the twentieth century.