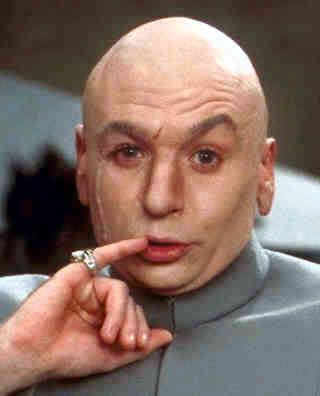 Doctors are little more than money-hungry, pocket-stuffing rich guys who drive around town lighting cigars with hundred dollar bills made out of the hides of poor people. On the other hand, attorneys are champions for the little guy—tireless public servants who would fight crime if they weren’t so busy chasing after doctors, the latter group who will stop at nothing to kill you. The Czar figured this out reading HR 3200, pages 701-800.

It all starts out in promising fashion. §1636 intends to reduce Medicare fraud by requiring the submission of claims to be executed in a 12-month, rather than a 36-month, time period. This is probably a good idea, and one of the few to be found…but the Czar is curious and honestly does not know: what fraud can be committed in 36 months than cannot be executed in 12 months? The actual wording of the section leads one to believe there is a very obvious scam the House knows about, so nice job here. But could one be so bold as to ask what it is?

Now things get bad for you and your doctor. Let us assume you wish to keep your private doctor, and he elects to opt out of participating in ObamaCare. Here are things he can no longer do.

—§1638: Suggest referrals, unless documentation is provided as to why it is strictly and medically necessary.

—§1639: Certify patients for home health services or durable equipment over the phone; a face-to-face “encounter” is pre-required. So if your paraplegic dad needs a replacement wheelchair from Medicare, your private doctor cannot do it unless he or she meets dad in person first.

Private physicians cannot do these things, in the name of reducing fraud and waste. However, ObamaCare physicians can, and evidently with few if any restrictions. So if your doctor does not want to participate in ObamaCare, that’s fine. But good luck treating any patients who stay at home! The Czar envisions some high-fiving done by legislators after those poison pills were developed.

There are a whole bunch of sections here intended to reduce fraud and waste. And in answer to a question the Czar keeps getting, one of the key forms of fraud is not listed here: unfounded or outrageous torts. False claims, unwarranted procedures, collusion between patient and physician to swipe money: that’s all here. But nothing indicating tort reform. So if a child is born with a chromosomal condition, the parents can (and sometimes successfully) sue for millions, although this is not a malpractice-related condition. However, this is paid for through the physician’s malpractice insurance, which increases premium costs.

Doctors and hospitals and insurance companies are in total consensus: the primary reason healthcare costs are so high and continue to rise is the abuse of malpractice claims and unlimited payouts. They are uniformly in consensus that if tort reform were to be enacted nationally, healthcare costs would significantly decrease.

Thus, it makes sense that in June, Tom Daschle said “Tort reform is going to be on the table,” when discussing healthcare reform. Yet the word “tort” exists nowhere in the document. Medical liability controls, such as caps on payments, is nowhere to be found in any form or fashion. The very word malpractice appears only on page 263, and that is in reference to a malpractice geographic index specific to California. Mr. Daschle, like most Democrats, has not read the Frankensteinian monster of this bill, because no one would tell a lie that blatant.

So why omit it? Here is something else omitted completely: doctors are still required, under HR 3200, to maintain private malpractice insurance. That’s right: your doctor foots the bill, but the government makes only the lowest cost payments to him or her for the trouble. Under ObamaCare, your doctor’s insurance skyrockets.

There are no shortage of horror stories. The Царица herself is friends with a woman whose infant died because a local pharmacy provided adult dosage of a medication. The family sued and settled for millions, and certainly the Czar would not dare suggest they give it back. But the pharmacy settled for millions, which they would have done with tort reform because the reality is that the resultant loss of business from the press hearing about would be many times that. Tort reform does not eliminate just compensation; in fact, settling out of court is a significant outcome of most cases. Winning a malpractice suit against a doctor or hospital usually results in the victims earning very little money after court costs, and then only after years. Settling is the more profitable and quicker option, and settling does not affect malpractice insurance costs. It’s the way most civil negligence and liability cases are handled: you settle outside court, and the result is that the victims wind up with more compensation than they would receive through court.

Objectors will say that if we cap malpractice claims to a populary quoted $250,000, then there will be no need to settle: the hospital would welcome the suit versus settling for millions. As is usually the case, the real death blow to the hospital is the public admission they acted incompetently, not the money. There are tangible and financial reasons this is true. Further, most serious tort reform bills do not set a low limit on physical damages, but only on non-economic ones. “If they kill your kid, you’re telling me she’s worth only a quarter million to you?” If negligence resulting in the death of a child is proven, you can bet the payment will be several times that after tort reform.

What objectors do not like to admit is that most malpractice suits against the medical community are unfounded. And that in some cases, particularly nursing home neglect or abuse, criminal charges apply. So really it comes down to this: malpractice claims have become a legitimized way of printing money. And since payments average 43% of the sought damages (with a few significant ones outweighing the majority that are far less than 43%), the current system is a bad system for victims as well.

So who supports the current system? By near consensus, both sides agree that the largest lobbyist against tort reform is the American Association of Justice (formerly ATLA, a trial lawyers association). Most malpractice suits are not successful, and the remainder pay out only fractions of the award. Of those, more than half the money goes to… trial lawyers! You read that correctly, if you did not already realize this, but attorney’s fees make up the bulk of malpractice payments. In fact, they make up the bulk of most tort payments.

But how does this affect HR 3200? Why would ObamaCare care more about the interests of trial lawyers than the doctors who save our lives? Answer: follow the money.

On another note, the Czar stopped cold at §1714, which provides for a state eligibility option for family planning services. There is no indication as to what family planning consists of, which we can all agree covers a range of interpretations from mild to wild. For a document that thought it necessary to define the word bilingual (§1224), this concept is left seriously undefined. But there are a few pages describing income levels for eligible participants, changes to the Social Security Act to include this, and the requirement for states to make this option available to those who qualify. So what is it? The Heritage Foundation took a guess at this, although they define it as §5004 in their version. The Czar, of course, cannot definitively say they are discussing abortion here…but again, since family planning is an undefined concept within HR 3200, it could indeed apply. No wonder the Democrats blinked when asked if this was the case. Who the hell knows? Certainly not the cut-and-paste team that slapped this together.

Bottomline, this group of 100 pages says a lot. Supporters of this bill must acknowledge that doctors are treated as guilty until proven innocent—unless they join in the program. Evidently, medicine would become the equivalent of a closed-shop: join the Obamacare union, or face complete disadvantages. We have also seen that despite tens of pages on ways to reduce fraud and abuse, the most blatant and recognized solution—tort reform—is ignored for political donation reasons. If the discussion of tort reform is allegedly beyond the scope of this bill, why was any and all discussion of malpractice insurance left out?

The Czar knows: because this bill is intended to sneak past public scrutiny and become law, before we realize that it treats doctors and other healthcare professionals as second-class citizens with fewer choices and options than the patients they would treat.