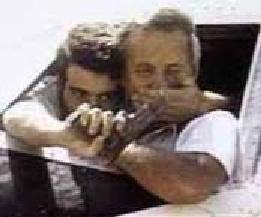 We now move into rather sinister territories.

By now, proponents of the bill will be wagging their fingers at the Czar’s post from yesterday. “We’re not looking to take away responsibility for nursing homes away from state governments. Where does it say that?” May the Czar point out §1422(a)(1). The Secretary [and Inspector General of the Department of HHS shall] implement use of an independent monitor to oversee interstate and large intrastate chains of skilled nursing and nursing facilities.” Perhaps there is where the Czar found it.

But this is just for a pilot program, they will counter. “§1422(a)(2). The Secretary shall select chains of [nursing homes] to participate in the pilot program from among those chains that submit an application to the Secretary….” See? It’s even voluntary.

The Czar points out “§1422(a)(4)(b): The Secretary shall evaluate chains selected to participate in the pilot program based on criteria selected by the Secretary, including where evidence suggests that one or more facilities of the chain are experiencing serious safety and quality of care problems. Such criteria may include the evaluation of a chain…with a record of repeated serious safety and quality of care deficiencies.” That does not sound voluntary to the Czar. Basically, this means the Secretary can go after nursing homes—who may have had no problems with the states—and demand they submit an application to volunteer for the pilot program. Papiere, bitte.

Look, the Czar wants the best care possible for the elderly in nursing facilities, especially since he sealed the old Czar up in a wall with a cask of Amontillado. The states can, and have been, handling this pretty well up until now for both interstate and intrastate facilities. The difference, of course, is that the Feds think since they’re paying for it, they have the authority to change this. Except the American taxpayers would be paying for it, and the majority of us don’t want it.

Note also that if the facility does not meet the federal pilot program standards, the Feds can close this facility and transfer your loved ones to a different facility of their choosing, not yours or your loved ones’. Page 612, lines 16-25.

Not to worry. This won’t be arbitrary. In fact, the Feds will establish a Quality Measure, employing a to-be-determined formula for computing whether or not your Gram is happy in her home. She will doubtless be quite pleased that her quality of life, in her remaining years, will be determined by a bureaucratic formula. If she fails the formula, of course, she’ll be plucked out of that home and put into a new home of the bureaucrat’s choosing. She can fall victim to the §1441 Quality Formula. And all over a mere pilot program.

This seems cold and unfair. So even though the management of the nursing facility has no ability to challenge these formula results if a resident fails them, the owners of the facility will be involved in a multistakeholder pre-rulemaking input hearing (§1443), along with the unions, nursing staff, physicians, other departments of the government, and manufacturers of medicine and healthcare materials. But since, per §1422, the Secretary makes the final decision, who gives a crap what the management thinks really occurred in a quality incident.

The Czar notices there are all sorts of Congressional land mines in this document. Here’s a perfect example: §1441 gives the Secretary authority to create new quality measures as he needs to for specific circumstances. Say, for example, there is a facility that is meeting the quality measures, but otherwise does not support the federalization program. §1444 gives the Secretary the power to come up with a new control measure (“non-endorsed”) and stick it to anyone he doesn’t like. That sounds like bad juju, right?

Except §1444 also contains a provision titled “Renal Dialysis Services,” that goes on to reinforce the provision you just read and does not mention renal dialysis again. So when the GOP says that Section 1444 is totally objectionable as giving the Secretary of HHS too much control, the Democrats can scream out that the GOP wants to cut out funding for dialysis, those Republican bastards hate the elderly so much! Neat trick, eh? You see all sorts of misrepresentations in this bill solely for that purpose.

Another thing sure to tick off doctors is that §1128H requires doctors to report all financial dealings with manufacturers, distributors, and sales reps. This initially sounds good, in that it appears to monitor bribes and other inside payments to doctors for prescribing certain drugs over others. But the actual wording includes “transfers of value,” which does not limit it to money. In other words, when a drug maker takes a doctor out to dinner or golf—which is fairly commonplace, quite innocent, and hardly limited to the medical profession—that now becomes a transfer of value that must be thoroughly documented and reported. Look, the Czar knows doctors do not routinely accept these dinners and golf games as bribes: doctors are very hard for a salesperson to see, and doctors can—and should—be compensated for their time with a dinner, round of golf, or even a nice lunch. Frankly, and especially under Obamacare, it’s the only way you’re going to talk to a doctor for than 30 seconds about your company’s new products. But to the Feds, they want a record of every putt and dessert. Think that’s an exaggeration? Check out page 648, lines 10-22.

And heaven help the doctor who gets a free sample of a new drug to try out. All that has to be recorded down to the dosage sizes and quantities given to the office.

Look, the Czar knows that anything with a cash value should be reported to the IRS and a potential form of income to a doctor or to a medical practice. But let’s be honest: the democrats are convinced that the medical community is in the pocket of big pharma, and they want to prove it to their conspiratorial voters by showing just how often a drug rep takes a doctor out for a steak to talk about a new treatment option of fibromyalgia. This is no different than a research firm paying you $50 to participate in a phone survey on dishwashers, so imagine you needing to fill out paperwork so the government can track it.

Title V begins on page 658, and has something special just for hospitals. Know how people who graduate med school fight for a handful of resident positions in key hospitals? After all, you want to be affiliated with a good hospital to get a jump on building your own medical credentials. Fret no longer, because hospitals now have limitations on how they use their residents.

Yes, for §1501 now puts the Feds in charge in distributing “unused residency positions.” This control is pretty total. If the hospital has nineteen positions open, but can only (ahem) justify ten of them, the government can assign the remainder to cover primary care of Medicare cases. Screw you, hospital. Oh, and if the Fed decides that isn’t enough, they can require the hospital to hire more residents. Screw you, profitability: the Feds now decide how many employees the hospital must have. And, if you read §1503, they determine how the residents will be spending their time. After all, they don’t work for the hospital; the hospital merely pays them.

Why? §1505(a)(2)(b)(iii) explains it: “[to] Understand the relevant cost and value of various diagnostic and treatment options.” Remember, one of the reasons healthcare is not available to all Americans is because doctors like to spend your money on unnecessary tests and treatments, like all those bogus tonsillectomies you hear about.

Title VI Subtitle A—Increased Funding To Fight Waste, Fraud, and Abuse. Does anyone else find this irony a bit funny?

These pages take a different tone, and one that has many people rightfully objecting. Whether it’s the extended care of our elderly, the daily business of being a doctor, how and where a resident spends his time, or how hospitals need to staff people, the fact is that the government will be in charge of it, either directly or by clear extension.

Precious little describes the self-imposed restrictions on the government. In most cases there is little if any recourse that nursing facilities or hospitals have to object to what is, in many cases, a takeover of operations.

And who makes the decisions? As always, this is to be determined later. What the Czar sees is an entire medical community entirely at the mercy of the Secretary of HHS, and little folks like patients and their preferred doctors have little if any say about how they will be used. We become little statistics in a cold, impersonal quality index formula.