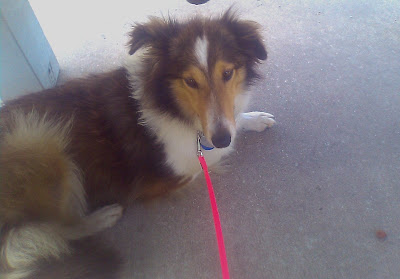 The Czar and family regret that we were unable to post today, as we were quite busy. We rescued a dog.

Seen here, this is Sally. She is a shetland sheepdog, and she is about two years old. She is terribly frightened of everyone and everything, but seems to have accepted that we are not bad people. That said, she is a long way from cuddling still and will need months of careful, quiet reassurance before she comes out of her shell.

This is our second rescue; our previous sheltie died from cancer a couple of years ago. And while that first one was darn near a perfect dog, we are very optimistic that we can help little Sally as well.

Her story is quite simple compared to other dogs. A concerned neighbor called the police, having spotted Sally, her twin sister, and Sally’s little puppy Jack trapped in a critically flooded fenced-in pen. All three had managed to jump onto metal barrels placed in their pen, and had spent a couple of days trapped up there to avoid drowning. Sally, in particular, was badly sunburned.

The rescue agency was called, and the dismissive owners simply said “Take ‘em.” We heard about Sally, from over one hundred miles away, and immediately contacted the agency. The agency remembered us from before, and was eager to have us drive down and meet her. The Царица fell in love immediately, and the deal was done.

Sally is terribly frightened. She has never had a home, or a family besides her sister (who is undergoing heartworm treatment and is expected to make a full recovery) and little Jake (who needs socialization and behavioral therapy before he can be adopted). She enjoyed a warm bath (first time we have seen a sheltie enjoy water), and ate a full meal. These seem trivial, but are impressive in light of our other discoveries: she does not know how to walk up or down stairs. We are slowly teaching her how to do it. She does not know how to walk through doors, and is terrified that they will close on her. Sally did not even shake her fur after getting that bath: her life consisted of being rained on, so there was no point in shaking. Needless to say, she really enjoyed the towels. It never occurred to her that something could feel so good. She spends a lot of her time nervously looking around, afraid that this will all end and she will wind up back in a flooded pen.

In better news, she is extremely comforted by the boys: she seems to really like the younger Царевич, and seems strangely drawn to him.

Here is why we rescue dogs. They get it. They never forget how horrible their lives were, and quickly catch on that the bad days are over. They appreciate it more. Additionally, the rescue agency covers the immediate medical needs and expenses, vigorously studies the dogs to learn their quirks, fears, and whether they are silly or dangerous. Appropriate rehabilitation is done, as is basic obedience and house training. What more could you ask to get a well-trained, healthy dog who just needs a bit of extra kindness? In fact, there is one more thing you could ask for: rescued dogs are less expensive than dogs from most pounds, and certainly more than the often sickly and untrained animals you can get from pet stores. Sally cost us $225 (we also paid more as a donation) and the gas to drive a hundred miles each way.

Worth it? She’s sleeping in her crate right now, curled up on some soft towels. Your Czar hopes she dreams of us, and not being stranded on barrels inches from drowning.

Your Czar also hopes that you would consider the serious upsides to rescuing a dog, cat, or other animal. The reward in doing so—the Czar states without exaggeration—is something you will never regret or forget.