Ghetto P., “the politics of personal destruction” is not original to Clinton or Obama. It was advocated by Saul Alinsky (the harmless-looking nerdy guy at right) on whom Hillary wrote an admiring thesis at Wellesley and who essentially invented the “community organizer” as a profession—in order to create discontent and usher in a socialist revolution under a slo-mo moderate façade. Alinsky was a revolutionary Marxist who developed a different paradigm of how to overthrow the existing political system, peacefully and using the characteristics of an open, free society against itself.

The thirteenth of Alinsky’s Rules for Radicals is:“Pick the target, freeze it, personalize it, and polarize it.” He elaborated, “The organizer who forgets the significance of personal identification will attempt to answer all objections on the basis of logic and merit. With few exceptions this is a futile procedure,” and “Before men can act, an issue must be polarized. Men will act when they are convinced their cause is 100 percent on the side of the angels, and that the opposition are 100 percent on the side of the devil.”

Alinsky also vigorously advocated that specialty of the modern left, the “HYPOCRITE!” attack: “Make the enemy live up to their own book of rules. You can kill them with this, for they can no more live up to their own rules than the Christian Church can live up to Christianity.” And, of course, his major tactic was the infiltration and subversion of existing institutions: churches, unions, foundations, universities, etc. All in all, pretty good stuff. And given that Hillary and Obama were the last men standing in the Democratic Primary, it’s possible you could count the party as a notch on Alinsky’s belt. 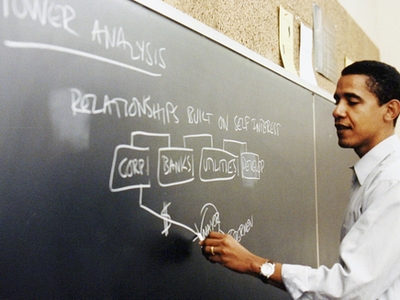 Obama is not only a student of Alinsky—trained by men from Alinsky’s Industrial Areas Foundation in Chicago (its meanignless name typically Alinskyan camouflage, à la ACORN )—but actually taught courses on the Alinsky method and his Marxian framework for analyzing institutions and achieving control over them, which Alinsky called “power analysis.” Say, what’s Young Instructor Obama writing on that blackboard at U. Chicago?

So that this stuff crops up isn’t at all surprising. If you’re looking for the modern left’s playbook, read Alinsky. (But don’t bother with his Wikipedia page. In good Alinskyite fashion, it’s written in the most anodyne fashion. “Marx” and “socialism” don’t appear anywhere on it. Odd? You haven’t been paying attention.)

Oh, and lest anyone think the Volgi is breaking news here, none of this was unknown during the campaign. It’s just no one thought it newsworthy, and the McCain campaign never focused on it.