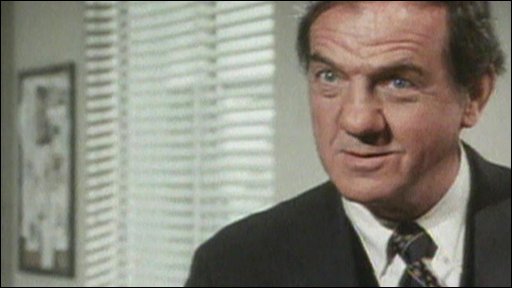 As Hollywood continues to clean out its junk drawer, the Czar was sorry to hear that 1970s television mainstay (and award winner) Karl Malden passed away at the impressive age of 97.

The Czar learned of his passing this morning when he turned on the television, and was innundated on every channel with news anchors remembering their first experiences with Mr. Malden, cutting away to brief interviews with people who knew him distantly, to promotional announcements for two-hour retrospectives this evening, and location shots all across America, where thousands of people have filled the streets to wear raincoats, hawk travellers checks, and berate Michael Douglas. We even saw one man wearing a hardhat that said, succinctly and meaningfully, KOCH.

Details on his funeral motorcade are being discussed in great detail, and debate ranges whether his services will be public or private. Doctors of all fields of medical expertise will on to discuss what makes people old, and whether or not Mr. Malden truly understood life as a geriatric. Rumors abound about his doctor, and what he knew about Mr. Malden.

Of course, the media response has been nothing at all like this for Mr. Malden. And why should the media focus on him? It isn’t like Mr. Malden was a freak show with dozens of accusations of child molestation who was so badly in debt that he may have nothing left to contest in a will. Instead, he was a classy guy who took on some risky roles, had fun portraying a wild assortment of life-like characters, and could film a movie without complaining about how difficult life is as an actor. And he STFU about politics.

And so the media wouldn’t be interested, would they?