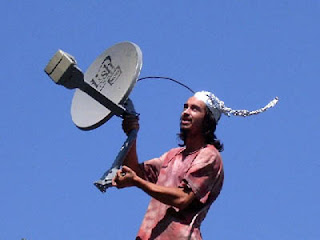 I read a recent study in the Economist that broke down politicians’ professions. In the U.S. by and far the largest profession that enters politics is lawyers. Of course, I could take a diversion here and make a crack that if you can’t cut it in the “real world” of law then you make that jump, or some lawyer joke, but the Czar covered that just below this post.

Lawyers, for the most part, are not technically savvy. So what happens when they see the looming sunsetting of the federal gas tax in 2020? They propose to replace it with a road tax where people are charged by the mile for driving on roads. And how would they enforce it? It’s been proposed that all cars and light trucks will have a GPS device in it to track it’s movement and report usage back to a billing center. Apparently, such a device is being tested at the University of Iowa thanks to $16M from a federal grant – your tax dollars at work.

GorT knows a little about GPS, so let me fill in (or maybe dig up) some of the holes with this plan (as far as we know or understand it):

1. GPS doesn’t work real well in tunnels and in “urban canyons” (i.e. downtown areas), it can have difficulty.
2. What sort of privacy measures will be in place? Does it feel a bit Orwellian to have this sort of data available to the federal government? Would the transmissions be protected such that other people couldn’t hack them? Do you want the Mandarin knowing where to go to jack boot you?
3. K.I.S.S. (Keep It Simple, Stupid) – there are simpler ways to get the required data to enforce a federal road tax. Every car has an odometer. Guess what it does? Measures how far you drive? Ok, sure, we’d lose some potentially valuable data like how much of your trip was on federal highways, state roads (or division between multiple states for those that travel over state lines) or county roads. And it wouldn’t allow for a variable rate tax where our overmasters government officials could encourage behavior by charging more during rush hour to deter traffic.
4. If I were a vendor for automated toll systems or speed cameras, I’d be against this unless I win the contract to build and manage it. Why would you need either of those? You can extrapolate speed from the GPS data and immediately issue a ticket against the car’s owner. You can also determine routes and see if a toll needed to be collected.
5. GPS has problems. There have already been issues with the GPS satellites this year and GPS can be subject to jamming.

I just can’t see this idea making it to fruition. Plus, by 2020, we’ll all be telecommuting and teleporting to work (oops, another Gormogon secret out of the bag).

Not that I’m biased, but I doubt this idea would have gained this much traction had we more engineers in decision-making roles and fewer sharks lawyers.