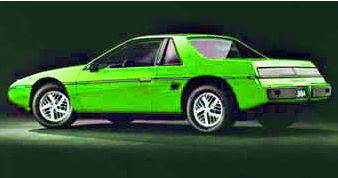 The ill-advised “Cash for Clunkers” is already turning out to be a typical Obama-administration deal.

If you remember this, starting July 24, you can take your old POS lime green Fiero into a dealership and get an additional $4,500 back from Uncle Sam to help stimulate the sagging auto industry sell new, and more, cars. Certain conditions apply, of course: this is fair, because the intent is to get the really old, nasty cars off the road.

So imagine the surprise of many thousands of Americans who found their nasty, old cars no longer qualify as clunkers.

Yeah, did we mention that? So you went to the EPA website on the 23rd of July, and it told you your car would qualify? Hmm. Should have checked it Saturday when they updated it.

That’s right—in another classic example of era of transparency Obama-style government, when the goal is to Save the World from Pollution, the EPA silently tweaked the eligibility requirements for the program on the weekend, screwing thousands of car buyers who learned—on the dealership showroom floor—that they won’t get a dime for their clunker beyond trade-in. No doubt this royally embarrassed the dealers, who get to be the bearers of bad news, and no doubt took it on the chin as thousands of customers stormed out of the showrooms cursing the thieving dealers…who were just being factual.

Why change them? The EPA has not said, but on July 25, the EPA announced the program would expand. Instead, probably upon realizing the economy improved a bit, that the program would prove too successful. So, secretly, the EPA changed the requirements so that hundreds of cars no longer qualify. As it is, estimates say the program is neither saving the environment nor stimulating the auto industry: all it does is screw the taxpayers. This stunt will cost each of us $8,000 per car sold under this program. Click on that link to read the hidden economics of this program.

Why change it over the weekend? Well, this is getting to be a trick the Obama administration is learning works. When something bad, unfortunate, or embarrassing occurs, release the news to the public on a weekend, when no one will notice or hear about it.

What really changed? This is the best part. It is not that the EPA changed the mileage requirements: that’s still 18 mpg or less. What they did was state that your 1987 Grand Marquis, which on Friday got 18 mpg, actually gets 19 mpg as of Saturday.

Why is that the best part? Because rather than say the program is crashing and we need to change the rules, the administration is saying the EPA needed to change the science of how MPG ratings are done, in order to magically alter the cars that qualify. Cool, eh? Now, what would happen if the George Bush gang were to advise the EPA not to take the mileage driven and divide it by the gallons of gas consumed?

This fails the Bush test, by the way.