Do you remember learning about the Scientific Process back in grade school? Maybe between the teachers highlighted in our “Great Moments in Teaching” series, the failures to pass simple board exams and the union masters they serve, your teachers didn’t get around to it. It’s likely that most of the media reporters out there also missed learning about it. Let me highlight the steps:

We’ll assume the hypothesis is that man is causing global warming. So when we get to step 4, let’s look at some of the data collected. Does the empirical data support the hypothesis? 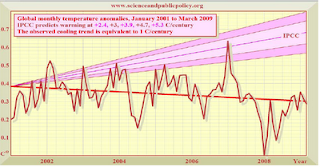 Nope – it the last 8 years, we’ve experienced a global cooling, equivalent to 1 degree Celsius over 100 years. Also, it significantly diverges from the IPCC’s predicted model. Keeping with the flawed theorists, 80% of the global warming should be reflected in the ocean temperatures. So let’s examine that: 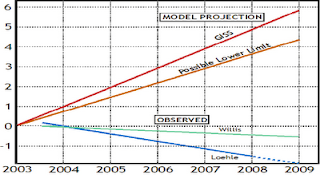 Strike two. (The vertical axis is in 1022 Joule increments). The ocean temperatures have cooled as well. AN opponent might argue that these numbers are contrived to prove “our” point. No, this data set is from over 3000 automated bathythermograph buoys deployed throughout the world’s oceans. While we’re talking about the oceans, remember the dire predictions that we’ll experience flooding of 20 to 250 feet (depending on which scaremonger you listen to)?? Well, that’s not really happening either:

That’s a rise of 3.2mm give or take 0.4mm per year since 1993. The average rise, based on geological data, over the past 10,000 years was 4 feet per century. Now we’re averaging 3.2mm per year which would be 320mm in a century or about 1 foot. I guess Al Gore is so worried about his predictions – in 2005, he spent $4M buying a high-end condo in St. Regis Tower, San Francisco, steps away from the ocean at Fisherman’s Wharf.

Tune in tomorrow when we look at some other facts and maybe draw an alternate conclusion.