Your Volgi offers a big слава слава слава! shout-out to Nikolai Khabibulin (whom the Volgi has admired since his days with the Jets) and the Hocks, as well as the Czar (and, I’m pretty sure, the Mandarin) and the entire city of Chicago. I want to say the last exciting playoff series in Hocks history was that epic Western Conference final in about ’95 when the Chelios-Roenick-Amonte-Belfour team lost to the KLM-era Wings in a Game 5 OT when Belfour (who’s was batshit crazy enough to have been the Manny of the NHL) misread a shot from like the red line. Shocking. Great hockey, but then followed the thirteen lean years prophesied by the Czar in a dream in which he saw thirteen skeletal cows eating only the mixture of acorns, dryer lint, and BBs fed to them by Bill Wirtz.

Meanwhile, we interrupt your regularly scheduled blogging for this message from the Oval Office. 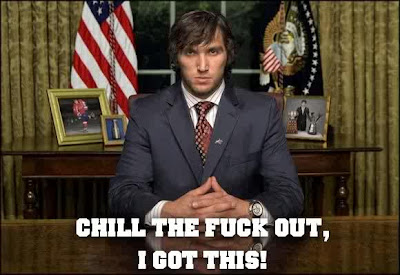 We now return you to your regularly scheduled despair for America in the age of TARP and decadence.