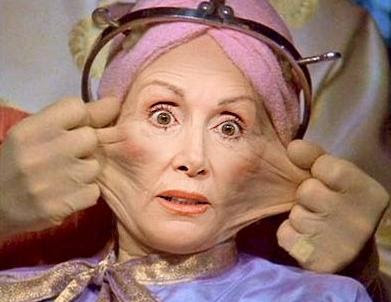 Nancy, first you said it never happened. Then you said you couldn’t remember.

Now it did happen, and you do remember, but they lied to you.

If any one of those statements is true, it looks pretty bad for you.

Any wonder why the current Congress has such nauseatingly low approval ratings, when it is being led by someone who is either ignorant, incompetent, or arrogant?

Don’t forget he also stole the 2000 election, knew about 9/11, and snuck out of military service in Vietnam. Goodness, he probably downloaded a gig worth of tunes of Napster in ‘99, too.

No, Madame Speaker, this has nothing to do with George Bush. This has everything to do with Nancy Pelosi, who was caught in a bold-faced lie and is convinced that if she screams “Bush!” loudly enough, people will believe it.

Pelosi also accuses the Republicans of hypocrisy for demanding she just admit it. She warns the public not to fall prey to this myth-making. “And now they’re trying to say, ‘Don’t put the spotlight on us. We told the Congress.’ Well, they didn’t tell us everything that they were doing.”

Perhaps not, but they did tell you. Now how about it?