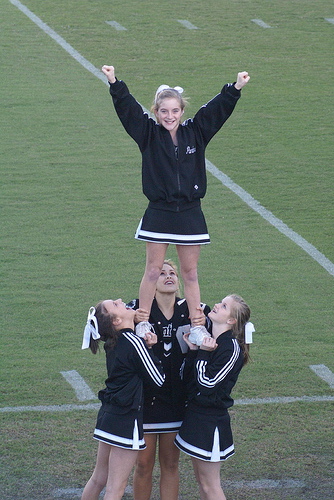 The Czar lauds Ghettoputer’s eye for news, in particular his outrage over Ms. Carlie Christine and her firing. The Czar also considers himself a bit of an expert on cheerleaders. Particularly non-pro-sports ones, and knows that when they wave to the camera, they are in fact waving to the Czar directly.

But if you ignore the obviously puerile giggles and snickers in this account, such as “Parents and some students…exposed the coach ” and “What apparently uncovered the coach,” etc., you cannot miss this gem of a typo. So far, this is the Czar’s favorite typo of the week (quoted as of 200904016/13:26 in case they catch it and correct it):

“The girls are supposed to look up their coaches,” says one concerned parent.

Errr…yeah. Well, now they can indeed. Your Czar recommends the extension prep (pictured).