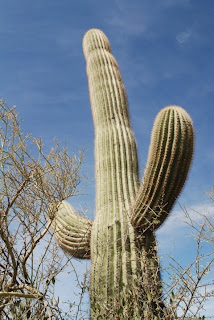 GorT and family have returned to the East Coast after a Griswold family vacation through Arizona and New Mexico.  It was very enjoyable.  A few observations:

1.  The whole “global warming / climate change” mantra has reached into the museums.  At the Sonoran Desert Museum, I was reading a sign about beavers in the area.  It mentioned that they are no longer found here because of a number of factors, the last of which was “possibly climate change.”  I stared at the sign for a moment and then continued on the tour.  A few minutes later, we were listening to a great talk about the Saguaro cacti (pictured left) by a knowledgeable docent and he mentioned that the “arms” only grow after the cactus is about 75 years old (see this link for some other details).  He also showed the growth rate of that cactus (slow) in a planter nearby.  As we left the museum and drove north through the Saguaro National Park.  Given the raw number and size of the Saguaros we saw, I started questioning what kind of “climate change” the beaver sign was talking about.  Clearly there were cacti here in the 125+ year old range and some older.  If there were such a climate change (implied that it was changed for the warmer) to drive the beavers away, then I failed to see evidence of such in the long standing vegetation of the area.
2.  The National Park Service does an excellent job with the parks out west.  We visited the Grand Canyon, Walnut Canyon, Saguaro National Park, Petroglyph National Park, and the Painted Desert / Petrified Forest National Park.  In each case, the information and presentation was top notch – on a budget that is likely way too thin.  Here’s my proposal: cut some of the stupid “global warming” pet project money from the budget and give it to the NPS for the upkeep and continuation of this kind of service.  And they can keep getting the money as long as they don’t stray from historical or scientific facts unless noting that something is “theorized.”