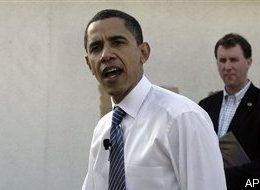 And now, another Obama apointee has some brutal questions to answer about his past.

In between the tax scandals, the foreign policy gaffes, the market-dropping-every-time-he-talks horror, the bailout fiasco, the banking industry preferring to risk failure rather than do business “his way,” the DHS report naming 60-70% of Americans as security risks, the emboldening of our enemies abroad, appointing himself executive powers over shareholder-elected CEOs, his science-fiction-based approaches to alternative energy, and his redistribution of wealth, it is difficult to believe POTUS Obama has been on the job only three months.

You think about long enough, and you start to count it up. He is well on his way to surpassing Clinton and Carter…and if you swing Democratic, Bush, Bush, Reagan, and Nixon…oh heck, we can throw them in as well…surpassing all of these guys combined for forehead slapping moments. Seriously, one week with the guy is like a year of Clinton-esque shockers.

And yet, another intriguing conspiracy theory occurs to the Czar.

We know there is widespread hysteria among the Democratic Party as to who is really running the Republican Party. It seems that Democrats and Republicans alke, in a rare display of solidarity, cannot seem to identify who is pulling the strings in the GOP.

At the same time, we see Democratic blogs all a-twitter (get it?) with anger over Obama’s growing alienation of the the Party Loyal, including his thoughts on terrorism, forgiving CIA “torture experts,” backtracking on gun control, prolonged extension of an Iraq presence, expansion of the war in Afghanistan, cozying up to Cuba and the million Cuban-American GOP voters, literal kowtowing to Saudi Arabia, and so much more that the Czar must catch his breath rather than continue. But God, do they ever feel betrayed.

Based on this, who would best serve as the leader of the GOP? Someone who will galvanize conservative gall against the Left. Someone who will increasingly infuriate Democrats. Someone who will drive all manners of Americans to punch the red ticket on the 2010 and 2012 elections. Someone like…well, actually, Barack Obama. He could well be the best thing for the GOP since (the Czar thinks) Andrew Johnson.

Could be. Could be a brilliantly insidious plan. And if not, how else does one explain the last 90+ days?