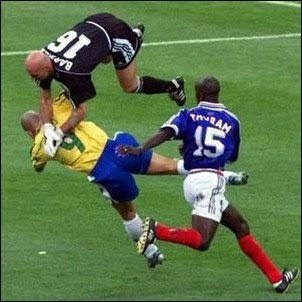 Let me make a rebuttal to the Volgi’s post here.  And let me say that one could take Mr. Webb’s post as somewhat of tongue-in-cheek – but I’ll take him at his own words: “For those who think I jest…“.  Mr. Webb makes some good points and presents some key facts.  Yes, soccer is a European sport that is “invading” America.  No, it’s not some plot to overthrow America through an athletic event.  I’m slightly surprised that Mr. Webb didn’t spend more time mocking the sport for the rabid European fans who trample each other at events or the South American enforcers who kill players for failing to win.  Maybe then, he’d be a true Gormogon.  Having said all that, I have to disagree with a few things.  First, let me be transparent and admit the following: (a) I played around 6 years of soccer growing up ending in late middle school, (b) I played intramural soccer in College (along with Flag Football, Softball and Ultimate Frisbee), (c) I’ve coached my middle daughter’s soccer team for 4 years now (6 seasons), and (d) I play (when all this Global Warming isn’t making the temperature outside so cold) adult soccer periodically (I try to play more…maybe it’ll be a Lenten resolution).

First, soccer is a good, basic team sport to introduce to children at an early age.  Our community has programs down to 3 or 4 year olds.  Mr. Webb might think of this as starting the brainwashing early but he hasn’t visited “the Red Dot” – I’ll elaborate on this in a minute.  It has a low cost of entry – an open field and a ball.  You can makeshift some goals and boundary lines and you don’t need cleats (although generally, I’d recommend them) and shin guards aren’t needed until the competitveness kicks in (trust me, they become worth it – I saw a guy get a compound fracture from not wearing them).  What other team sport offers the ability to teach kids about offense and defense, the flow of a sport up and down a field, perceiving the full field, anticipating actions and reactions, and working together as a team?  I’d argue none or at least none at this low entry cost and ease of teaching to children as young as 3 or 4.  Also, elements from soccer translate very well into basketball and hockey and almost directly into lacrosse.
Second, there are plenty of other sports that we can bash for being “boring”.  Baseball comes to mind for me first.  What a snoozefest.  First, it is barely a team sport.  On “offense” it’s pretty much an individual effort with minimal team effort in baserunning.  On “defense” it’s largely an individual effort (the pitcher) with secondary individual efforts (fielders) catching the ball.  At times, you need to make the play at a plate so two or three players get involved (6-4-3, for example, for those who score baseball).  Basketball can be – it lends itself more to a team sport, but if you watch the NBA at all – particularly in the regular season – it’s again, one or two players at either end of the court each time down.  If we don’t constrain ourselves to the 4 major sports then let’s star tlooking at golf (look the grass is growing), tennis (ping-pong-ping-pong-ping…), and any sort of auto racing (pedal down, turn left, count to 400 or 500).
Third, Mr. Webb’s argument about the use of feet is ridiculous.  each sport has various restrictive rules: basketball players have to dribble (unless you’re an all star driving to the hoop), baseball players have to stay within the baselines, hockey players have to use a stick to hit the puck, etc.  If nothing else, soccer significantly improves the dexterity of ones’ feet – I’ve seen it in action over the last four years.
Fourth, yes, the 0-0 score after 90 minutes ending in a shootout.  Well, hockey adopted something similar and I’d take both soccer and hockey’s approach over a baseball game going to the 17th inning until some poor schmuck lets a grounder go through their legs because they are so damn tired of taking turns standing in the field, spitting tobacco on the bench and spending 3 minutes fouling away until getting struck out for the past 5 hours.  Hint: there’s a reason they call baseball the “national pastime” and not the “national sport”.
Finally, soccer can be aggressive and the only sense of “everyone is a winner” that I’ve seen comes from parents.  Not from the sport.  Our community takes sports seriously.  Too seriously for my liking for the most part – my wife and I joke about other families being 3-letter families – meaning that their kids will be playing soccer, football (flag or tackle), and fall baseball in the autumn and basketball, lacrosse and baseball/softball in the spring.  I always wonder when these kids have the time to be kids, play kick-the-can, or focus on doing their homework – maybe they get to it after the 2 hours of TV and some time on the X-Box or Wii.  But, I’ll save that digression for another post.  Soccer is one of those sports, though, that our community (largely a conservative, right-leaning one) supports.  If you want to see aggression, come about 90 minutes into our two hour adult soccer sessions and check it out.  I’m sure you’ll think that there’s not a lot of “feminine” action going on.
* – as a refresher (or a pulling-back-the-curtain), just after the 2004 election, the Washington Post published a color-coded map fo the DC area and suburbs.  Most of the People’s Republic of Montgomery County was colored blue to dark blue indiciating a large vote for the democrats.  In the midst of the sea of blue was a bright red dot which was called out by the Post as a pocket of strong republican / conservative voting centered right around my church (2 doors down the street).