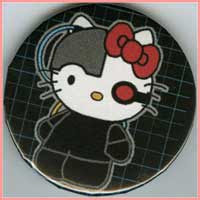 GorT is a science fiction fan and grew up with a variety of science fiction shows.  These include some pretty bad ones like Automan, Battlestar Galactica (the bad one), V, and Space: 1999.  Of course, Star Trek was a big part – aliens, phasers, space battles – lots of action wrapped around pretty simple story lines.  Some were campy (“I, Mudd”) and others just plain weird (“Turnabout Intruder”), but there were stand outs like “Mirror, Mirror” (evil Spock with the beard), and “Balance of Terror” (Star Trek’s take on “The Enemy Below”).  In general, though, science fiction shows since Star Trek have enjoyed limited success.  In my personal opinion, the new Battlestar Galactica (into its 4th season) and Firefly are two exceptions besides the one I’ll go into depth on below.  Please note, I’m limiting this scope to mostly the space/futuristic shows as opposed to Heroes, X-Files, etc. for this post.

Star Trek, taken as a whole across all the various incarnations has enjoyed decent success.  Well, Bryan Fuller (Pushing Daisies, former Star Trek series writer) wants to dip back into the Star Trek galaxy and create another series in that universe.  In general, I’m in favor of this.  Berman and others took an alternate take on the Star Trek universe with Star Trek: The Next Generation (with ‘Puter’s favorite: Wesley Crusher), Star Trek: Deep Space Nine (with Volgi’s favorite Hawk…”Spenser!”…oh I mean, Capt. Sisko), Star Trek: Voyager and Enterprise (I think the Czar has a soft spot for Scott Bakula).  None of these, I would argue, really measured up to the original – sure there were good storylines (and plenty ‘o bad ones) and better special effects but the pure adventure of the original Flash Gordon and Buck Rodgers (think comic books not the TV series).  Fuller wants to bring it back to the original series.  With J. J. Abrams movie coming out later this year, maybe the timing will be right.  Here’s a little of GorT’s optimism hoping that we’ll get another decent science fiction show on the small screen.  As long as they have another version of “Mirror, Mirror” I might be hooked.  I’m sure Bryan Fuller is looking for the green painted ladies and torn shirts.  So either it’ll live up to expectations…..or else.